The Yocto-Visualization (for web) application has been coded to be as similar as possible to the native version. However, there are some differences. This week, we propose to discuss them.


Without further ado, let's get to the heart of the matter and list these differences.

This is probably the most obvious difference. While the native version relies on the windowing system of the host operating system, the web version has its own windowing system in the browser window. In Yocto-Visualization (for web), the configuration windows cannot be moved or resized... With the exception of the property editor.

By default, the latter is stuck on the right side and occupies the whole height of the browser, but it is possible to change its side by clicking on the ⇤ icon in the window banner. 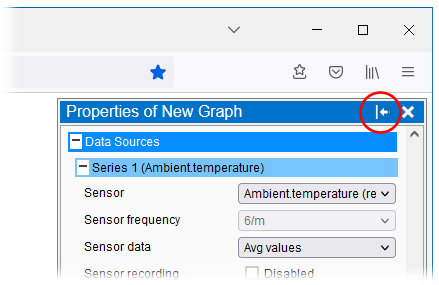 Unlike windows, widgets can be moved and resized. Once you have placed a widget in edit mode, you can either use the arrow icons that appear on the widget or enter numerical values for size and position in the Window section of the properties editor. 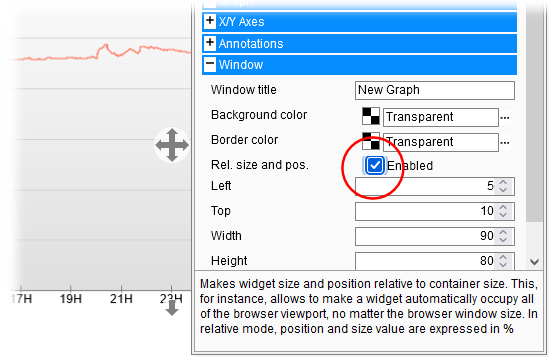 For example, if you want the widget to be centered in the middle of the page you can use the following relative values:

Yocto-Visualization (for web) does not have direct access to the USB ports of the machine on which it runs, and that's good. Who wants an arbitrary web site to access their USB devices? To use Yoctopuce modules connected to the local machine, you have to run a VirtualHub and add its address 127.0.0.1, port 4444 in the list of hubs that Yocto-Visualisation (for web) must use. 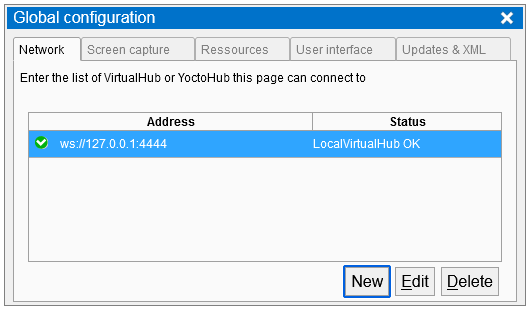 The native version of Yocto-Visualization automatically saves its configuration when you quit the application. For the web version, it was not possible to do the same when the user leaves the web page displaying the application, at least not in a reliable way. It is therefore up to the user to remember to save after a modification. To help the absentminded, Yocto-Visualization displays a floppy disk icon at the top left of the screen to indicate that a modification has been made, just click on it to save. 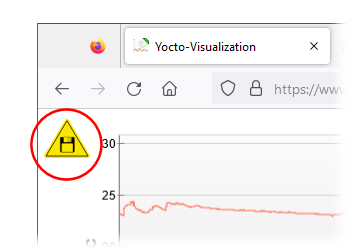 Don't forget to save

If needed, the application will ask you for a Read/write login, aka 'admin', to save

The native version of Yocto-Visualization tries to load the data logger content of all the sensors it detects, the idea being to be able to display the data as quickly as possible when needed. We quickly realized that this method was not very reasonable when Yocto-Visualization (for web) is installed on a VirtualHub (for web) instance because such an instance can very easily contain dozens of sensors, each with a data logger that can contain months of data. Attempting to load the contents of all these data loggers in parallel when starting the application can quickly become a problem, especially on low-powered machines such as tablets. That's why from version 52602 Yocto-Visualization (for web) loads the content of the data loggers only when it needs it. 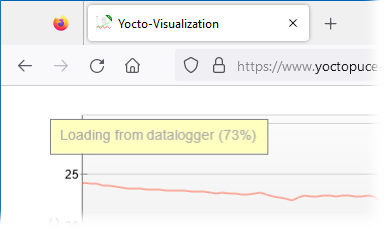 The content of the data loggers is now loaded on demand 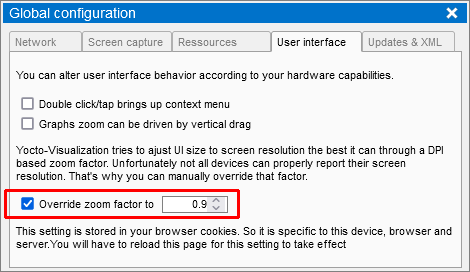 You can set the zoom level manually

The screenshots appear in the downloads section of your web browser

The native version provides two configurable alerts per sensor that can execute the system command of your choice when triggered. Of course, you can't do that with the web version. Instead, you can execute a line of JavaScript. This could be useful if you run Yocto-Visualization (for web) in your own web page.

We have covered the essential differences between the native and web versions of Yocto-Visualization. As a conclusion here are some useful links: