Some time ago, we published a Node-RED node which allowed you to use a Yoctopuce sensor in a Node-RED schema. This week, we publish other nodes which enable you to use Yoctopuce modules other than sensors, such as Yocto-Relays, Yocto-Buzzers, and so on.

In a previous post, we explained how to install and use the YSensor node in a node-RED schema. This solution however has two problems. First, the code wasn't well optimized, which caused disconnections when several YSensor nodes where used in the same schema. Second, it wasn't possible to use our actuator modules (Yocto-Relay, Yocto-Buzzer, and so on).

Our new package node-red-contrib-yoctopuce provides answers to these two issues.

As installing and using this package is very similar, we are going to concentrate on what's new. If you don't know how to install a Node-RED package, you can read our post on Node-RED, the process is identical, you must simply use the new package node-red-contrib-yoctopuce.


In this package, the information to connect to the YoctoHub are not directly in the Node-RED node, but are grouped into a "Configuration Node". You can't see this "Configuration Node" on the schema but it is shared by all other nodes. In this way, there is a single connection to the YoctoHub per schema, while before each node created a new connection.

Concretely, when you add your first Yoctopuce node, you must enter the connection information. For the following ones, you simply select the same configuration. 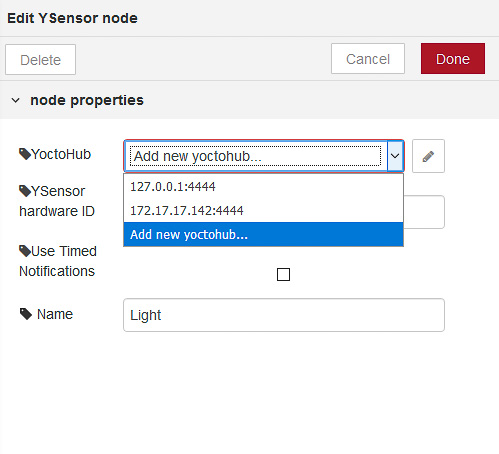 The connection information is shared between all the nodes


The parameters of a Yoctopuce node


Note: If you are not at ease with the logical structure of Yoctopuce modules, we recommend that you start by reading this post.

Yoctopuce nodes correspond to module functions. Consequently, for each Yoctopuce node, you must provide the following information:


You can also assign a name which is displayed in the schema. This name has nothing to do with the logical name of Yoctopuce modules, it is used by Node-RED only to make the schema more readable. 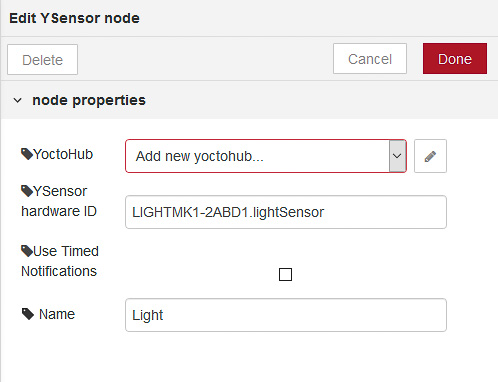 The configuration window of a YSensor node

It's the simplest node of the package. It allows you to inject in a schema the published value of the function as soon as it changes. The message payload is a string of characters.

This node is equivalent to the node used in our previous package. The YSensor node has only one output which publishes the value of the corresponding Yoctopuce sensor. You can use this node only with functions which inherit from the YSensor class (YTemperature, YVoltage, and so on) and the message payload is a floating point number.

We added the possibility to use periodical notifications, instead of using the current value.

This node enables you to control the volume and the current frequency of the buzzer. You can also directly send a series of notes which the buzzer plays.

This node enables you to change the color of the RGB leds of the Yocto-Color.

This node enables you to change the color of NeoPixel leds which are connected to a Yocto-Color-V2. It also enables you to start a preprogrammed animation.

This node enables you to modify the current of a 4-20mA loop driven by a Yocto-4-20mA-Tx.

This nodes enables you to change the state of the digital I/O port. Only bits configured as output in portDirection are taken into account.

This node enables you to display the content of a message on a Yocto-MiniDisplay, Yocto-Display, or Yocto-MaxiDisplay. It also enables you to start a display sequence that has been recorded beforehand.

This node enables you to change the state of a signal led, such as those available on the Yocto-Buzzer.

This node enables you to control the PWM output of a Yocto-PWM-Tx. You can modify the frequency or the duty-cycle.

This node enables you to change the state of a relay. This node accepts the "A", "B", "ON", and "OFF" commands. You can also commute the relay to a given state only for a specified duration.

This node enables you to send data on a serial port with a Yocto-RS485, Yocto-RS232, or Yocto-Serial.

This node enables you to control the position of a servomotor.

This node enables you to control the output voltage of a Yocto-0-10V-Tx.

This node enables you to reset the sate of the Yocto-WatchdogDC.

A node can modify only one attribute at a time

In the same way, you can use an input node and an output node for the same function. For example, if you use a relay, you can command the relay state with a YRelay node and obtain its current state with a YFunction node. It is very useful, for example with a Yocto-LatchedRelay which can have its state overridden by the switch located on the module.

This new Node-RED package is available directly in your "Manage palette" menu, but if you want to install it manually, you can also obtain it from the Node-RED site: https://flows.nodered.org/node/node-red-contrib-yoctopuce