Node-RED is a visual programming language that can be used to connect various Web services, API or peripherals together. Node-RED can use data coming from a Web server, a MQTT broker, a mail server or even Twitter, but not from Yoctopuce sensors. That is, until yesterday...

Node-RED is a service written in Node.js which can be used on most operating system (Windows, Linux, etc.). It is even included by default on Raspbian. The Web UI can be reached using a Web browser on port 1880. The key point of Node-RED is that it is not just an application, but a visual programming environment.

In opposition to standard programming languages, the user does not enter text to describe the interaction between objects, but he "draws" the relation between the objects. Each object is displayed as a "node" that the user places on the schema. Nodes outputs and inputs are then linked together. A node can represent a web service, like Twitter, a logical operation, like a test, a UI widget, or as we are going to see, a sensor device. Depending on the node role, it can have zero or one input and/or one or more outputs.

The default set of nodes offered by Node-RED is quite limited, but there are plenty of community-maintained packages which can easily be installed as add-ons. We have therefore created a new package that adds a new type of node named YSensor, which can be used to feed the measures from Yoctopuce sensors into Node-RED.

To add a YSensor node, you must install the package
node-red-contrib-yoctopuce-sensors into Node-RED configuration directory. By default this directory is ~/.node-red on Unix and %HOMEPATH%\.nodered under Windows.

Once the package is installed, you must restart Node-RED so that the Node-RED UI displays the new YSensor node in the input section. 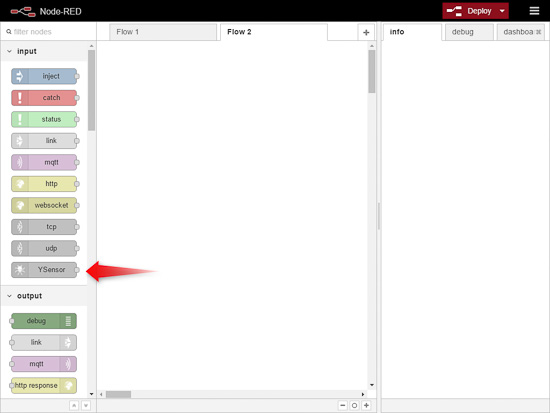 
The YSensor node has a single output, which publishes the value of the corresponding Yoctopuce sensor. This node can be used directly by any other node.

A YSensor node has six parameters: 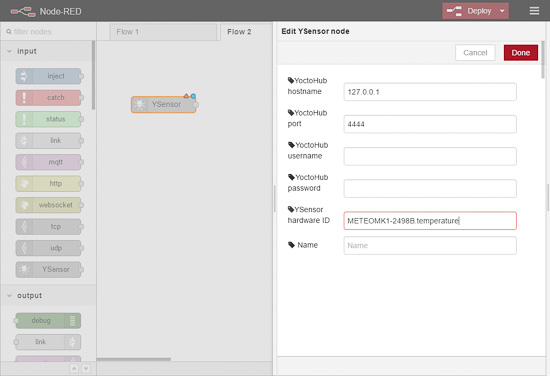 The YSensor Hardware ID corresponds to the hardware identifier of the sensor to use. Typically, it is set to SerialNumber.FunctionName. For instance, the temperature sensor on the Yocto-Meteo device with serial number METEOMK1-12345 would be METEOMK1-12345.temperature. Note that you you have set a logical name to a sensor, you can also use it instead of the hardware identifier.

The Name parameter can be used to provide human-readable name to the node, for the sake of clarity. This name is however not used by the Yoctopuce package itself.


As it is not obvious to clearly describe clicks and drags in a visual programming environment, we have made three short videos that illustrate how the YSensor node can be used.

To start, we will make a very simple schema that simply logs the temperature measured by a Yocto-Meteo on the debug console.

We therefore use a YSensor node connected to a debug node. When configuring the YSensor node, we enter the hardware identifier of the temperature sensor (METEOMK1-2498B.temperature) and give the name "Indoor" to the node. We leave the connection parameters to their default values since the Yocto-Meteo is connected directly to a USB port of the Node-RED server.

Then, we update the schema to add a graph node and a gauge node in order to add data visualization. We link the two new nodes to the Indoor node that represents our sensor.

Eventually, we add a second temperature sensor to our schema. This time, the sensor is connected through a YoctoHub-Ethernet with IP address 192.168.1.67.


Node-RED is a nice environment to implement simple interfaces or automation processes in almost no time.

It is possible to get good-looking graphs.

However, for real-life application, expect to hit soon or later the limits of visual programming: when schemas become overly complex, it is often easier to embed part of the application logic in a function, written as Javascript code. Which means, ending up by writing a program again...

The yoctopuce module doesn't show up under Palette Manager as an available module to install.

@ronniemac: For the "unexpected strict mode" could you contact support@yoctopuce.com to look how we can remotely help you?

Regarding the "Manage Palette" issue, our package has not been indexed by the Node-RED, we will
contact the admins to know why and we will report evolution of the situation here.
Until then you can still manually install the package with the command:

Update: the package node-red-contrib-yoctopuce-sensors is now listed on the Node-Red web site and in the "Manage Palette" menu.

Regarding your "unexpected strict mode reserved word" error, I've not been able to reproduce this error on my setup (RaspberryPI 3 Model B v1.2 with the Raspbian image of March 2017).

Awesome! Thank you for the support and getting the module indexed by Node-Red.

How can you set the frequency updates for node-red from VirtualHub?

@houy: There is no refresh rate. The value are pushed by the device itself to Node-Red as soon the value of the sensor has changed.


But you can change the handling of the Yoctopuce device and configure it to push the average value every minutes. To do so, you need to change the advMode of the sensor to "ADVMODE_PERIOD_AVG" and set the reportFrequency to "1/m". You can change these attribute with the VirutalHub or the command line library.

You may find more details on these attributes on this article: http://www.yoctopuce.com/EN/article/everything-you-wanted-to-know-on-yoctopuce-sensors

NOTE: This feature has been released two weeks ago, so ensure that your devices are using the latest firmware.

I am trying to get my new Range Finder sensor working with node red running on Windows. Specifically, how can i figure out what my Hardware ID is for the the Range Finder? Do I have to have the Virtual Hub running to get Node Red to work?

The range finder device is not showing in the virtual hub list??

@jewendt : check your USB cable, make sure it is not a charge cable, then contact Yoctopuce support.