Here is again a product enhancement news, this time about our volatile organic compound (VOC) sensor. From now on, the Yocto-VOC-V3 replaces the Yocto-VOC-V2. As usual, neither the form factor, nor the sensor position, nor the software API changes from one version to the other. And for once, the newer version is even a bit cheaper than the old one...

If you don't know what you could do with a VOC sensor, start by reading our very first blog post on this topic, written in October 2012 when we had just put on the marked the original Yocto-VOC.

The first evolution from the Yocto-VOC to Yocto-VOC-V2 was merely a version update of the VOC detector from the same manufacturer. This time, it is a different story: the Yocto-VOC-V3 uses a completely different VOC detector, produced by Sensirion. This new detector is much smaller, but includes multiple reactive elements specific to different gases, which provide a higher long-term measurement quality, and makes it possible to recalibrate the metal-oxide sensor automatically. 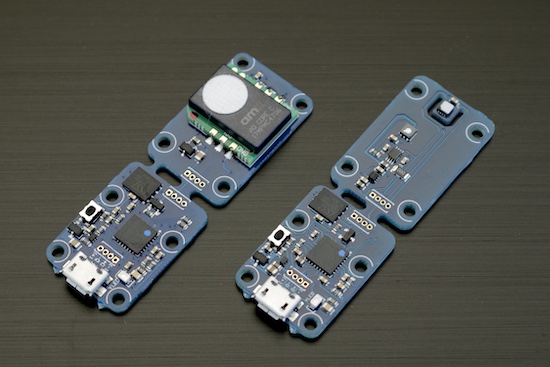 
In order to keep the size and layout of the Yocto-VOC-V3 identical to the previous versions, we put the new detector at the exact same location where the sensing part was in the past. But the space freed by the smaller detector has made it possible to add to the circuit a high-precision ambient temperature and humidity sensor, the same SHT35 that we also use on the Yocto-Meteo-V2. Not only does this add two extra measured parameters important to evaluate air quality, but in addition it allows for higher accuracy VOC measurements thanks to a built-in algorithm for humidity compensation.

Unlike the previous VOC detector, for which the manufacturer did not publish any detail about the detection method and for which the measurements only had a relative value given the lack of absolute reference, the Sensirion detector is better documented. The VOC estimation is based on two different signals measured by the SGP30: the reactivity to hydrogen (H2), with an accuracy of 10%, and the reactivity to ethanol, with an accuracy of 15%. These two measures are combined using Sensirion proprietary automatic baseline calibration algorithm described in European patent EP3203229A2, in order to avoid the measure drift typical of metal-oxide VOC sensors. The result is on one side an estimate of the total VOC concentration in ppb (tVOC), and on the other side an estimate in terms of equivalent CO2 concentration in ppm (VOC). These two estimates have been designed so that they would be highly correlated with reality, but no absolute accuracy is certified by Sensirion. These numbers should therefore be considered as an overall metric of the ambient air quality, but not as calibrated physical measurements.