This week, we present a new sensor, the Yocto-VOC. These three letters are the acronym of Volatile Organic Compounds, all of these molecules which mix with the oxygen in the air we breath, such as carbon dioxide for example. Then, what can we do with this nice little VOC sensor?

The goal for this sensor is to estimate the part of the surrounding air which is not "pure", but polluted by gaseous emissions from machines, smokes... or even from your own breathing. Breathing may seem of little consequence, but you only need to enter a dorm with closed windows in the small hours of the morning to realize that the consequences can't be dismissed as easily.

Obviously, it's difficult to summarize air quality by a single number. The convention we follow consists in indicating the VOC volume for a given air volume, in parts per 1 million (ppm), as we do when measuring the CO2 concentration. Remains to be known which compounds are taken into account in the estimate, and which accuracy can have such a measure. Obviously, it depends on the kind of sensor used. Our sensor is able to detect alcohols, aldehydes, aliphatic hydro-carbons, amines, aromatic hydro-carbons (petrol vapors, etc.), carbon oxides, CH4, LPG, ketones, and organic acids. 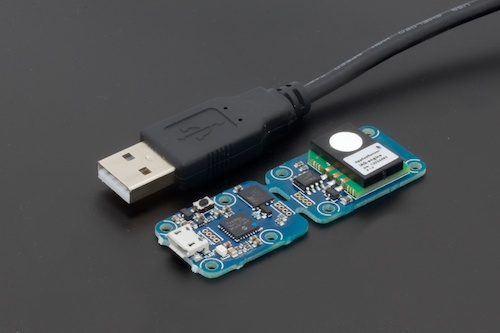 
This new sensor is not an embedded chemical analysis lab, such a solution would be much too large and much too expensive to fulfill its goal. When you see the size of the Yocto-CO2 which "simply" measures with precision the concentration of a single well defined molecule in the air, it becomes obvious that a scientific measure covering a large range of VOC in a small portable sensor is completely impossible.

The Yocto-VOC is therefore a sensor of a different type: it's a "qualitative" sensor, which uses a measure of oxidation of a semi-conductor to deduce variations in the VOC concentration in the air. Instead of a absolute measure, we have therefore a relative measure, which follows rather well the general VOC concentration in the air over a period of time. In order to make this relative measure easily interpretable, the sensor auto-calibrates itself when starting at the value of 450 ppm, a standard value for "pure" air, and then adjusts the estimated value by applying the measured variations.

The "measured" value must not be taken as an absolute value, but as a good indication of the evolution of air quality in the short term. Interestingly, if you put at the same location both a Yocto-CO2 and a Yocto-VOC, you'll notice that the tiny Yocto-VOC manages to follow quite faithfully the CO2 concentration, measured more scientifically by the dedicated sensor. However, when we introduce another compound in the air (such as a whiff of perfume), while the CO2 sensor doesn't notice anything, the Yocto-VOC signals it immediately.

To summarize, the Yocto-VOC is convenient to
- give you an idea of the air quality variation in an office throughout the day
- allow you to detect the the arrival of oil vapors or other contaminants
- automatically start to ventilate when the air quality decreases

On the other hand, don't count on it to prove to a judge that your son is breathing stale air in his dorm, the measure is not scientific enough for this. To comfort yourself, you can always try funnier applications, such as detecting the scent of a girl who'd happen to pass by... :-)