Here in Switzerland, there is a risk of energy shortages during next Winter, and we can't exclude having scheduled or unscheduled power outages. We took this opportunity to build a small device to help up manage the consequences of potential power outages.

At Yoctopuce, many tasks are automated with computers scattered everywhere, and after a power outage, we must turn them back on one by one without forgetting any. This week's project is thus to build a box which indicates the state of each machine. If, on top of this, the box enabled us to perform a clean shutdown on all the machines, this would allow us to easily power off all of our machines before scheduled power outages.

The hardware part is dead easy, as we only need a panel of leds and a big button, so we need:

The principle consists in running on each computer a small script which takes control of the box and lights in green the led corresponding to it. If for one reason or another the script stops, the said led automatically switches to red. If the script detects that the box switch was engaged, the system sets the led to orange and triggers a machine shutdown. When the computer is off, the led goes off as well. 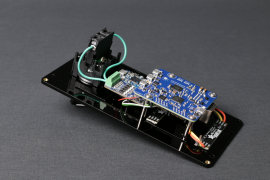 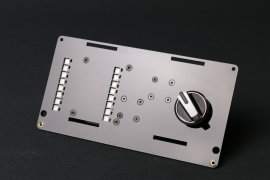 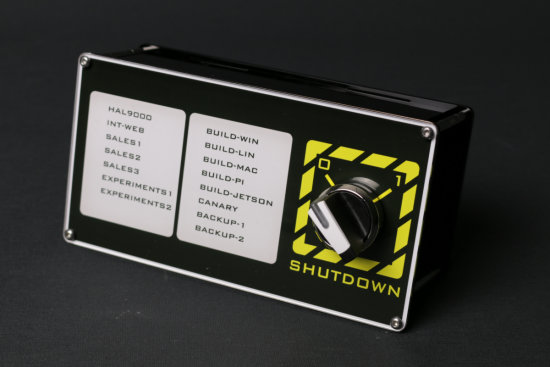 The somewhat complex part of this project is script programming. There are several aspects which must be properly managed. We decided to write a first version of the script in Python because it's a language which is easily available under Windows, Linux and MacOS.

The YoctoHub-Ethernet can manage only a limited number of connections in parallel. The script must therefore connect to the box, do what it has to do as fast as possible before closing the connection, then wait a more or less random time before starting again. Waiting for a random time prevents all the machines from trying to connect to the box at once.
The structure of the code thus looks like this:

You must store somewhere which computer corresponds to which led. We could provide this parameter to each script instance thanks to the command line, but we thought it more appropriate to centralize this information. It so happens that the YoctoHub-Ethernet contains a small file system in which we can save a configuration file. We selected a very simple format where each line corresponds to a computer in the shape LED index=Addresse IP, for example:


As we would like to launch the scripts again after each configuration change while parsing the configuration file only when necessary, we used the fact that the YoctoHub-Ethernet can compute the CRC of each file to detect changes.

Note that on computers with several network adapters, we don't know which IP address your script will detect first. It's not a big issue as long as nothing prevents you from defining several lines for the same led in the configuration file. As long as all the addresses correspond to the same computer, the system will work.

To make sure that a led automatically changes color when its controlling script has stopped, we use again the Yocto-Color animation trick. It uses the fact that Yocto-Color animations run in a loop, unless they contain an instruction to jump which enables them to go to another animation. So we pre-program two animations:

And while we are at it, initialization defines the led start up color to red, if not already done. Thus, when power is back on after an outage, all the leds used are red by default.

We oversaw the most important features of this small application. If you want to know more, you can always download the complete source code here. 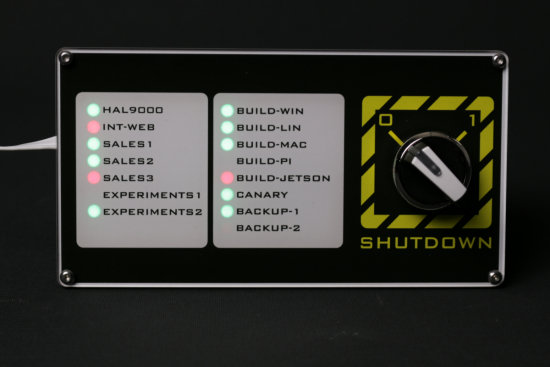 At one point, we could rewrite the script in C++ to make it a Windows service, which will be smarter than having a DOS window open all the time on the Windows machines managed by this system.

Note that if the box enables us to shut down all the computers remotely, it doesn't enable us to turn them back on. We may have the opportunity to talk about this again :-)