At Yoctopuce, we like raspberries. So we thought that we would have our own local production, with an automatic watering system controlled by our modules. To do so, we retrieved a raspberry bush from the garden and we planted it in a pot with sensors to monitor its health. The aim is to adjust the water dispensing based on the humidity of the soil. Unfortunately, it's too late in the season to have raspberries this Summer, but we are still going to tell you about the modules used to maintain the raspberry bush alive.

As a first step, we repotted the raspberry bush. We selected a large oval pot, which we prepared with care by adding clay balls at the bottom so that water doesn't stagnate in the soil and drown the bush. When the bush was repotted, we set it on the windowsill to be as close as possible to outside temperature and light. A little aside on growing raspberry bushes: they are rather easy to grow, they need about one watering per week, perhaps more often in case of high temperatures, and they need sun to produce raspberries. Our watering project can easily be adapted to any other type of plant, inside or outside.

Description of the system

To best monitor the state of the soil, we decided to use soil sensors from Delta-T Devices. The selected sensor enables us to obtain the temperature, the water content, and the electrical conductivity of the soil. To communicate with the sensors, we use a Yocto-Serial module which we slightly modified because the sensors communicate in SDI-12, but we'll tell you more about this in an upcoming post.

For watering, we used a small peristaltic pumprated for >=39ml/min when using a 6V power supply. In our case, we power the pump with 5V and our tests shows a 40ml/min flow rate. To drive and power the pump, we use a Yocto-PowerRelay-V3.

We also use a Hall effect sensor to check that the pump works and to monitor the number of rotations performed by the pump, thangs to a magnet that we added inside the pump. To power and read the values of the Hall effect sensor, we use a Yocto-PWM-Rx.

We then connect the three modules to a YoctoHub-Ethernet to communicate with the control software. When everything is connected and when communications work correctly, we put everything in an enclosure because, as the electronics needs to be put outside, it needs to be protected from the rain. 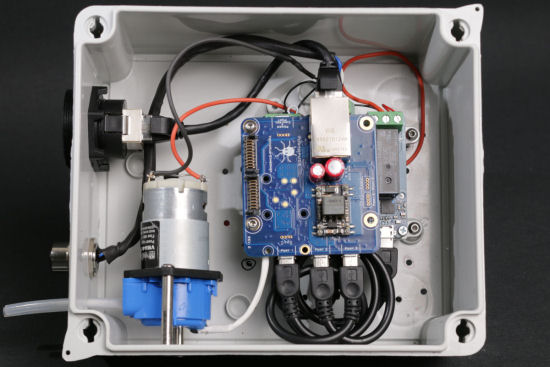 Wiring of the electronics

Now that the modules are connected, we install the sensors and the pump as follows: 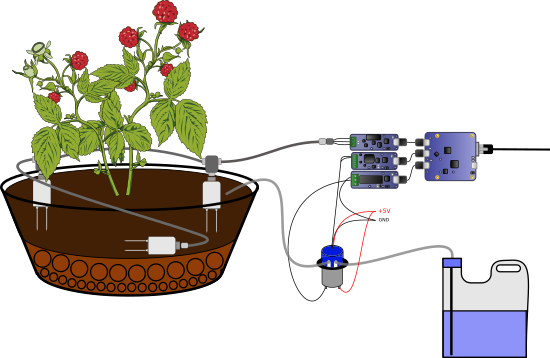 A job runs in the Yocto-Serial which queries every 5 seconds all the sensors and publish the values in the GenericSensor functions. All the measured values are posted by HTTP callback and available on a Yocto-Cloud .

Furthermore, a C# program checks every 10 minutes wether the buried sensor has a water content of less than 5% to make sure the raspberry bush is not thirsty by lack of water. The relay triggers the pump if the value is below 5% and the Yocto-PWM-Rx counts the number of revolutions of the pump, by counting the number of activations of the Hall effect sensor due to the magnet in the pump. We let the pump perform 1000 revolutions, then we wait one minute and we retrieve the values of the sensors again until the water content of the soil is at about 25%.

Graph taken directly from the Yocto-Cloud, from the 10th to the 17th of August


We observe above the values measured between the 10th and the 17th of August. There is clearly a decrease in the soil water content. So far, we didn't have any heavy rain or any watering, so there is not much to see on the graphs.

The fourth graph shows when the relay is activated as well as the values measured of the PWM. As watering didn't yet need to be triggered, the graph is still empty except for a manual test.

We expected the bush to react somewhat badly to repotting, but we were surprised to see the extent of it. Following repotting, we decided to give more water than usual to the raspberry bush to help it getting used to the new pot, except that it didn't at all appreciate having a lot of water in one go. It started to have dried leaves. So we decided to stop watering the soil and we waited to see whether the bush would get used to the new soil, still keeping a eye on the measured values.

After a few days, we see on the graph that water content hasn't decreased much so we decided to repot the bush once more to prevent its death by drowning. 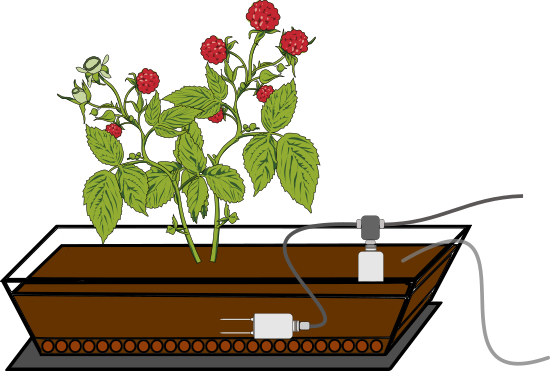 New pot with the sensor locations 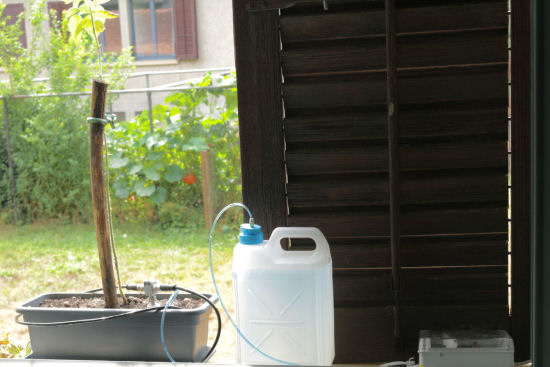 The raspberry, the water canister and the electronic box


We'll keep an eye on it and on the measured values to ensure lots of raspberries next Summer.

"To communicate with the sensors, we use a Yocto-Serial module which we slightly modified because the sensors communicate in SDI-12, but we'll tell you more about this in an upcoming post."

I am looking forward to this upcoming post! I am using SDI-12 sensors regularly from both Campbell Scientific and Vaisala.

But what about the opposite end of the SDI-12 link? It would be very useful to have a Yoctohub that interfaces the Yocotopuce USB modules to the "outside world" through SDI-12. This would allow converting almost any analog sensor or actuator to communicate through SDI-12 with data loggers and weather station hardware while allowing rather long cable runs. I have been searching for ways to do this, and have not found any flexible way of achieving this. Only ADC boards or custom made boards. Just an idea... ;-)

@Pedro Aphalo: we will indeed have something new for SDI-12 sensors coming soon :-)

Regarding a SDI-12 YoctoHub, it would not be easy to expose all features of a YoctoHub via a SDI-12 link. We might have a solution for that a bit later, using a new generation of YoctoHubs where you could add your own logics. But this is still a bit further away...