If you have read this post dating from 2012, you know that from 10 items onwards, you can have your own logo engraved on your single width enclosures, and this free of charge. Well, as it happens, Yoctopuce no longer offers this engraving service... instead we offer a printing service...

At the beginning, when we realized that it was imperative to offer enclosures for our electronic devives, we decided to make these single width enclosures in ABS for the bases and in PMMA (acrylic glass) for the covers. We selected PMMA specifically because it's a material which is easy to engrave and to cut with a laser. 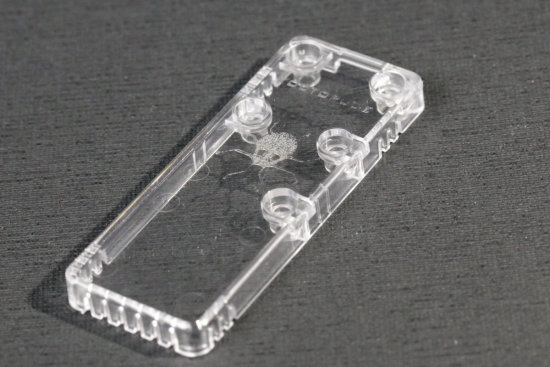 However, this material is brittle and can catch fire if one heats it up enough. Later on, we had to decide in which category Yoctopuce products fitted for CE certifications. We selected "Electrical equipment for measurement, control, and laboratory use " because that's what most of our customers seem to use it for. This choice had unexpected side effects: this category has requirements on enclosures, in particular:

Therefore, we decided to use polycarbonate, this plastic being extremely resistant to impacts and the type we use follows the UL94 V0 standard. 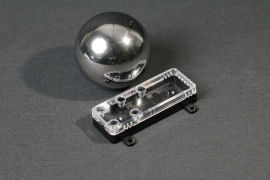 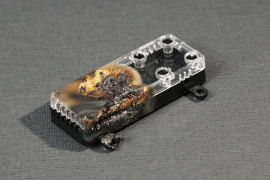 Objectively, this somewhat forced choice of new material for the enclosures improved the quality of our products, but it also had other consequences:

Eventually, we decided to drop laser engraving and to use a flat-bed UV printer.

How does it work

These printers use a technology close to the inkjet of printers, except that instead of spontaneously drying, the inks that are used solidify after being exposed to ultraviolet radiation. In the opposite to standard inks, these inks stick extremely well on a variety of surfaces, including polycarbonate. These printers are available in the form of a large plate which can move under the print head which moves laterally. This geometry makes them rather voluminous machines. 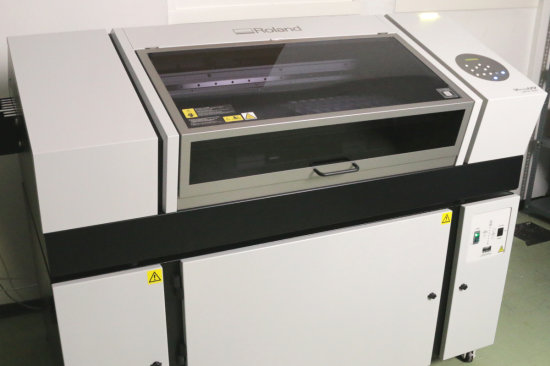 It looks like nothing, this thing is still a good meter fifty wide

It's a bit more tedious to operate than an office printer because there is a preparation phase for the print files. When the files are ready, we put the objects to be printed on the bed of the printer, we carefully set the height of the bed so that the printing zone is at the correct distance from the printing head, we send the print file to the printer, and we wait. Compared to paper printing, it's rather slow. 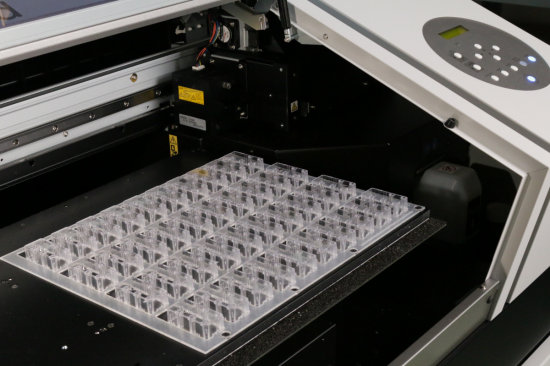 A series of covers ready to be printed

Our printer has 7 "colors".


Primer ink is used as a base for difficult materials such as glass and aluminum. We don't need it for polycarbonate.

You probably wonder about the use of a transparent ink. In fact, this ink enables us to add "effects" to the prints. For example, you can use it to make glossy a matte surface, or on the opposite to make more "matte" a glossy surface. It's this last option that we use to print the Yoctopuce logos on standard enclosures. The result is quite close to what we obtained with laser engraving. But what's funny is that, as the ink only changes the reflective characteristics of the surface on which it is applied, the logo is only visible from specific angles. It's makes the marking quite discreet, which we rather like.

We obviously can make more traditional prints with colored inks. But you must know that the cyan, yellow, and magenta inks are semi-transparent. This enables us to make a "stained-glass" effect which might interest you. Most of the time, we print a layer of white beneath for a more classic rendering. 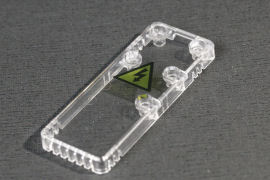 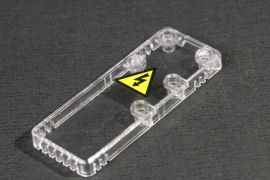 It's better to put a layer of white beneath the cyan, yellow, and magenta inks

Resolution is in the order of 600dpi which, without being extraordinary, enables us to obtain results vastly superior to those we could expect with laser engraving. Therefore, we now have less trouble with logos containing small details or other tiny characters.

How to order enclosures with your logo

If you order at least 10 enclosures of the same height (think/thin), you can ask to have the logo of your choice printed on your enclosures. Simply put a note in the comment field of your order and send your logo as a vectorial file (.EPS, .SVG or even .CDR) to Yoctopuce support. It won't cost you anything, the idea being that whether we print your logo or our own, it doesn't really make a difference in the end.

Compared to laser engraving, this printing process with UV inks offers a much better rendering but it also has some limitations:

We naturally had some fun with our new printer and here are a few examples of what we can obtain. 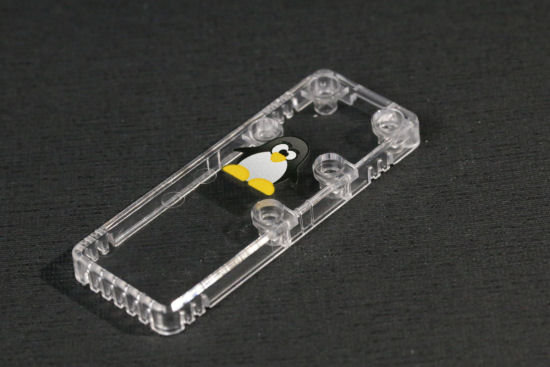 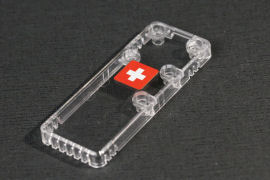 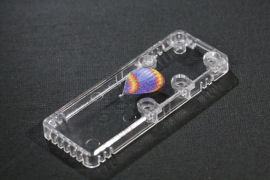 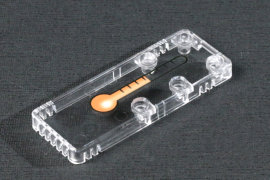 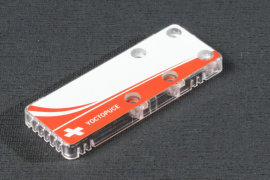