The main improvement of this new version of the C++ library is the addition of the SSL/TLS support, but to do so we had to somewhat change the compilation of this library. As usual, we tried to maintained backward compatibility as much as possible, but some of the choices we made may break the build scripts. For this reason, we publish this library in Beta/preview in parallel with the official version.

However, the C++ API of the library remains the same. Classes and functions stay the same and we didn't remove any feature. Code intended for use with API 1.0 works as well with this new version.

The main novelty is the addition of the SSL/TLS support enabling you to connect to the VirtualHub v2.0 in a secure and encrypted manner. To use a secure connection, you only need to add the "WSS://" prefix to the VirtualHub address when calling YAPI::RegisterHub. The WSS prefix means "WebSocket Secure" and configures the library to communicate with the WebSocket protocol over an SSL/TLS encrypted connection.

Here is the code to initialize a connection with a VirtualHub v2.0 with a secure WebSocket:


Note that you can also force the use of the old HTTP protocol, but using an encrypted connection, with the "https://" prefix:


In both cases, the Yoctopuce library takes care to encrypt the transmitted data.

The other features of the library are available and the use of the C++ API remains unchanged. To sum up, you only need to change the first parameter of the YAPI::RegisterHub method to use an encrypted protocol.


The v2.0 C++ library is available on our web site and we also created a new repository on GitHub: https://github.com/yoctopuce/yoctolib_cpp_v2

As explained above, the use of the library hasn't changed, but the compilation is different. The first modification is that there are more files to compile.
To compile the library, you must compile the following files:


You must also add the Sources and Sources/yapi/mbedtls/include directories to the include path of the compiler.

For Linux and macOS, nothing changes, as we already used a GNU makefile. For Windows it's new, as we used nmake before. You must therefore install a GNU make, for example with Chocolatey to recompile the C++ library. But you don't need to install GCC, because the makefile still uses the Microsoft cl compiler. However, under Windows, it's usually much simpler to use Visual Studio and to drop all the files mentioned above in your project.


You can find all the examples of use of the different Yoctopuce modules as well as several examples of the use of the features of the API in the Examples directory. Each example contains a GNU makefile, a Visual Studio project, and an XCode project.

Under Windows, you can compile and test the examples with Visual Studio 2017 or 2019. 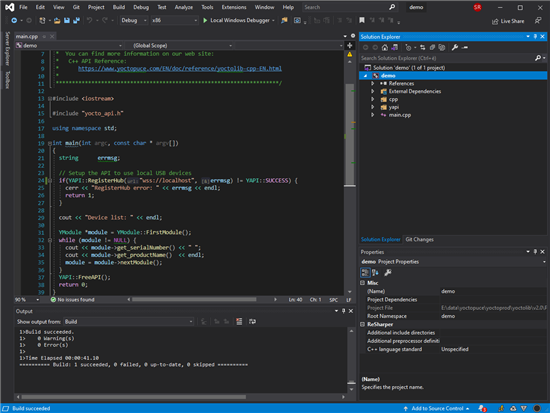 The Visual Studio project for the Doc-Inventory example

And under macOS, you can use XCode, version 9.3 or higher. 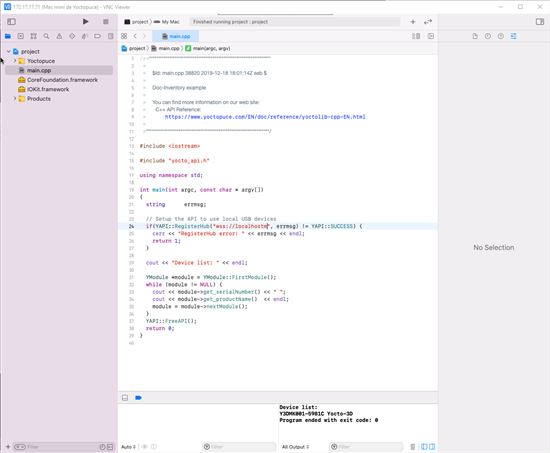 The XCode project for the Doc-Inventory example

Under Linux, the simplest way is to use the GNU makefile. To compile the example, you only need to run the make command in the example directory.


Currently, SSL support is not available for mips and mipsel platforms.

For the library to be able to use an encrypted connection, both parts must support SSL/TLS. At the time of writing, only the VirtualHub 2.0 supports this feature. You can't therefore use this feature to communicate with YoctoHubs yet.


Don't hesitate to contact support if you have trouble using this new version of the library or if you want to pass suggestions along.