Relays are one of the most fundamental components used in automation: opening and closing a circuit is the most intuitive way to remotely control a machine. We offer several kinds of USB driven relays, depending on the type of circuit to be switched. But we also have an alternate choice: solid-state relays, solely based on semiconductors. And on this topic, we have fresh news...

A solid state relay is an electronic component that behaves almost like a relay, but that does not include any moving part: the electromagnet used to switch the relay is replaced by an optocoupler, and the contacts that close when the relay is active are replaced by FET transistors or similar components. 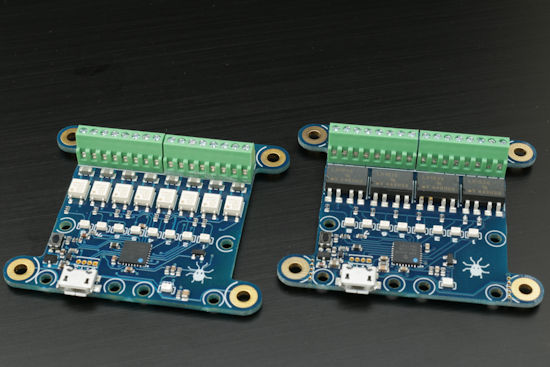 
In line with our product evolution policy, the new version has been designed so that it fits wherever the old version would have fit. But it will be usable for many more applications, thanks to the capabilities of the new solid state relays, made by OMRON:

The 0.1Ω on-state resistance is almost neglectible: it is about the same as a 1-meter USB power cable. With these specifications, the Yocto-MaxiCoupler-V2 is a real alternative to standard relays for switching low-voltage light loads or signals, analog as well as digital. With 8 channels, the device density is higher than the Yocto-Relay.

The only limitation of this new version compared to the previous one is the withholding voltage at 60V, whereas the previous version could hold 120V when safety standards would allow it. But as a matter of facts, the main case for this was to withhold transient voltages caused by inductive loads, such as solenoids. So we have equipped the Yocto-MaxiCoupler-V2 with multilayer varistors, effectively protecting its outputs agains voltage transients as well.

The Yocto-MaxiCoupler-V2 is therefore an ideal product to drive small DC motors, interface electrical building controls, drive lamps up to 48V and for all other applications that require switching more than two low-voltage channels.