In a previous post, we showed the effects of magnetic and gyroscopic perturbations on the inertial sensor of the Yocto-3D-V2. The standard method used for sensor data fusion could in some cases find itself undermined, to the point of making the measures useless. Therefore, we recently added in the Yocto-3D-V2 firmware the possibility to choose between several fusion methods, in order to enlarge the application range where this product can be used.

The BNO055 sensor of the Yocto-3D-V2 is actually made of three distinct sensors:

To be able to deduce in real time an orientation, these three measures must be combined:

It's this complete method that the BNO055 calls NDOF (nine degrees of freedom).

The ideal algorithm works well when all the BNO055 sensors are operational. However, things go wrong sometimes in real life...

When external elements perturb the lines of the magnetic field, the fusion algorithm tries to correct the orientation value in an erratic way, although the gyroscopic orientation could be correct. In this case, we would prefer an estimate of the position based only on the gyroscope, which would be better, even if we need to periodically reset the orientation by software.

Gyroscopes are highly efficient when they are well calibrated. They can self-calibrate very easily when the sensor remains idle (or in a simple translation at constant speed). But if the sensor is used during an extended period without ever being idle, for example on a ship, the gyroscope starts to drift little by little and to make up moves that don't exist, and which are embedded in the fusion algorithm. If reactivity is not of the essence, we might prefer in this case a position estimate which doesn't use the gyroscope but only the compass.

Thus, you can now find in the Yocto-3D-V2 configuration (after updating your firmware and your VirtualHub) a new setting enabling you to select between several fusion modes: 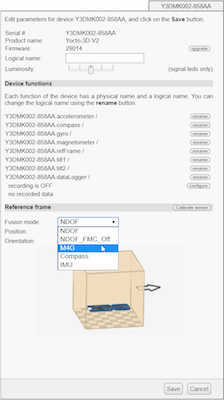 
Here are briefly the characteristics of each mode:

If you have a doubt between two modes for your application, nothing beats an experiment: try them and see which one gives you the best results.

When will the sample code be updated to demonstrate changing the Fusion algorithm?
YRefFrame has set_fusionMode, but no other (C#) class uses fusionMode/get_fusionMode.

Is the output of different fusion algorithms YRefFrame.get_bearing()? Would that mean that YRefFrame.registerValueCallback provides the latest bearing value?