How clean is the air you are breathing? What does it contain, exactly? It's not easy to obtain a full answer with a simple sensor, as one should, in fact, look for all the volatile compounds, one after the other, that could be present. There are however single gas sensors that provide, for specific applications, appropriate answers. Let's see how to use them with the Yoctopuce modules.


Let's start by a small survey of gas sensor types, their advantages and disadvantages.

These small sensors, of the size of a thimble, seem very interesting at first sight: not large, not expensive. It's the type of cheap sensor that you can find on sites such as SparkFun and SeeedStudio. They work by measuring the heat emitted by the target gas combustion when in contact with a specific, heated metal. You can use them to detect variations of gas quantity, but it's difficult to obtain a true measure: resistance variation depending on gas concentration is neither linear nor even stable over time. It is therefore essential to calibrate these sensors frequently using a calibration gas. Otherwise your measures will only have a humorous meaning. These sensors can also lose all their sensitivity if they are "poisoned" by some volatile substances in the air. In short, they are very far from our definition of a plug-and-play measure. Let's forget electro-catalytic sensors. 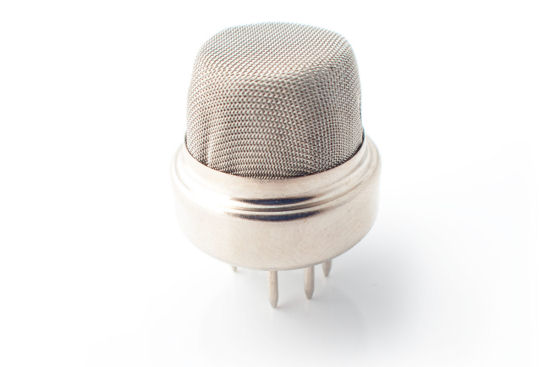 An electro-catalytic sensor, worth what it is worth...

Semiconductor sensors are base on a principle somewhat similar to the preceding sensors: you heat a substratum made of metal-oxide-semiconductor and you measure the resistance variation which happens when in contact with some gases. In the opposite to electro-catalytic sensors, this process is relatively stable over time. It's main drawback is its lack of selectivity: it reacts to many volatile organic compounds, without making any distinction between them. These sensors are therefore more appropriate for a rough estimate of the quantity of volatile pollutants in the air, such as provided by our Yocto-VOC, than for an analytic measure. 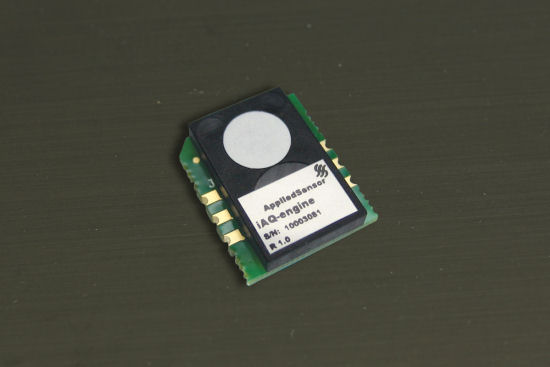 The semiconductor sensor of the Yocto-VOC

The infrared detectors use the principle of light selective absorption by specific gases. By measuring the quantity of absorbed light for a given wavelength, we can determine the concentration of some gases, providing an absolute measure. This method is reliable and stable over time. Our Yocto-CO2 uses this principle. Unfortunately, the market provides small infrared sensors for only very few gases. 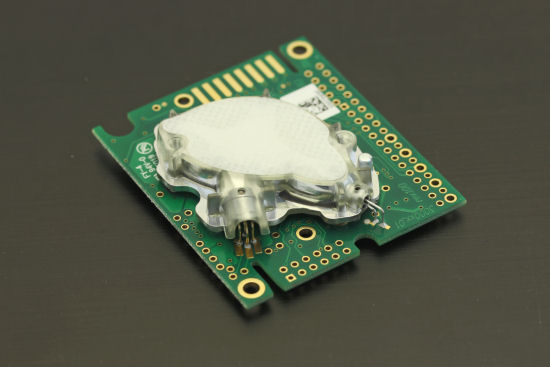 The infrared sensor of the Yocto-CO2

To make things simple, these sensors work somewhat like electric batteries for which the chemical composition would include the target gas. When the gas is absent, the voltage is null. When the gas is present, it triggers a chemical reaction and creates a voltage directly linked to the target gas concentration. By carefully selecting the chemical composition of the reagent present in the sensor, manufacturers obtain sensors reacting very specifically to each gas and which provide an absolute value, very stable over time. Naturally, like any electrochemical battery, these sensors have a fixed life span, after which the electrolytes are used: generally, the manufacturers indicate two years (actual life span is often better, but better be on the safe side). Compared to an electro-catalytic sensor which you must regularly recalibrate with gas samples, it is much less trouble. 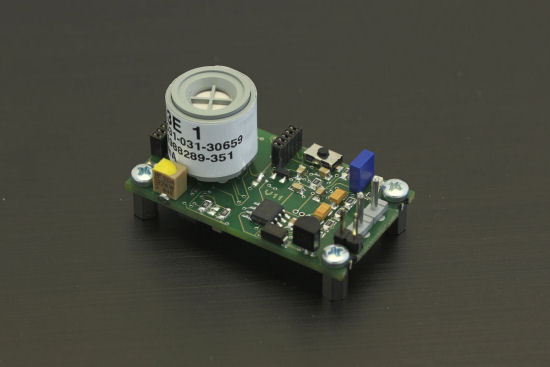 An electrochemical sensor and its 4-20mA transmitter

So, where can we find these electrochemical sensors, and how to connect them? Not so easy. As we are talking about rather specialized devices with a limited life span, the sensors themselves are not sold by our usual electronic component providers. As for the gas sensor manufacturers, they tend to cater to large industrial customers rather than to small customers with specific needs. After looking around for a while, we finally found a provider with a large range of electrochemical sensors, and who agreed to sell small quantities.

The manufacturer: City Technology. This company also commercializes sensors previously sold under the SensoriC name before its acquisition by City Technology. It provides a large selection of electrochemical sensors for which the response to specific gases is very precisely documented. If you take the sensors alone, there is a catch as the sensor power supply, the signal amplitude, and the measuring manner vary from one sensor to another. But you can buy all the sensors equipped with a small electronic circuit providing a standard 4-20mA interface. Then, two wires solve all the issues, including power supply.

The most interesting gas components to monitor in urban air are nitrogen dioxide (NO2), carbon monoxide (CO), and ozone (O3). We therefore tested the followings sensors: 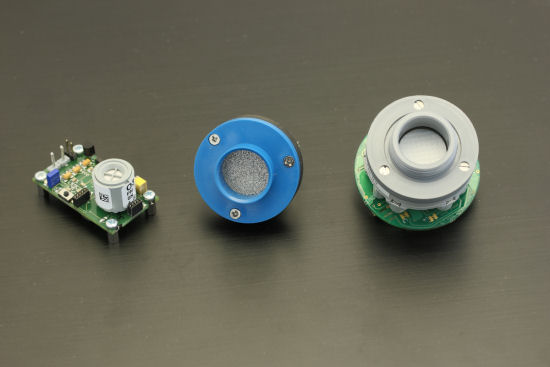 On top of this, we tested a chlorine (CL2) sensor, a toxic gas which can be released by water disinfection facilities or when cutting some chlorinated plastics with a laser (Model T3CLH, 0-5ppm).
We bought all these sensors from Euro-Gas Management Services which agreed without fuss to sell them by the unit (in the opposite to many others).

The sensors don't have all the same form factor, but all ofthem are connected in the same way to the Yocto-4-20mA-Rx, with two wires: one connected to the 23V power supply, the other connected to the current loop input. The third terminal (mass) must not be connected. Documentation on ECO-SURE and O3 sensors says that polarity is not important (the sensor includes a rectifier). For T3 series sensors, we connected the red wire on the 23V power supply and the black wire on the current loop input. 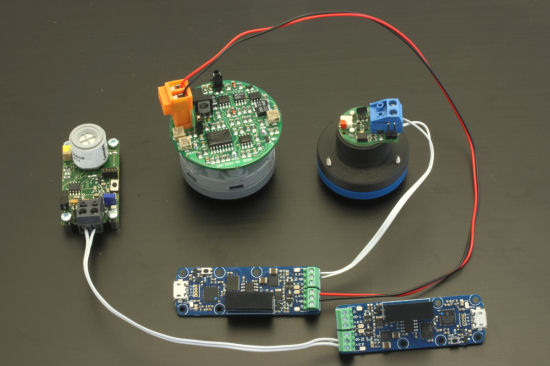 Connecting the sensors to the Yocto-4-20mA-RX, only one is polarized

The sensor price depends on its type and on the quantity, but expect GBP 250 per 4-20mA compatible sensor, except for the carbon monoxide ECO-SURE sensor which costs about GBP 120 in its 4-20mA version.

As the Yocto-4-20mA-Rx has two inputs, we need only two modules to connect our four sensors. Combined to a YoctoHub-Wireless posting data on Xively, we obtain an independent measuring station for gases polluting air, of professional quality and for a much lower price than solutions used in official measuring stations. This is actually what drives government agencies to study and encourage such private initiatives enabling us to better characterize air pollution. 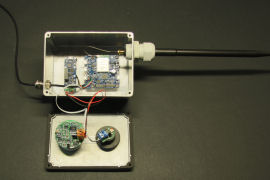 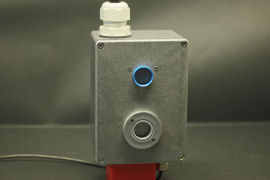 A box, some gaz sensors, a few Yoctopuce devices
and you get a WiFi air-quality station