Quasar is a framework written in JavaScript that promises the holy grail for developers: to make a cross platform application. Quasar is based on other well-known technologies such as npm, Vue.js, Webpack, Electron, Cordova and gathers them in a single framework. As we are curious, we wanted to test this framework with our TypeScript library.


For this test, we will see if we can make a simple application that displays the list of modules connected to a YoctoHub.


The first thing to do is to install Quasar with the npm command "npm i -g @quasar/cli". Then you can create a new project with the command "npm init quasar".

This command launches the Quasar project creation wizard which allows you to specify the project name and various parameters. For this example, we kept the default parameters except for the language where we used TypeScript instead of JavaScript. You can then test the application in a web browser with the command"quasar dev".


What we are really interested in is to see if our library works with the framework. To do this, we must add our TypeScript library with npm.

Once the Yoctopuce library is installed, it can be used in the application like any other library. You just have to import the objects you use:


Note that we used the path yocto_api_html to use the HTML version of the Yoctopuce library. For more information on this subject you can read our tutorial "How to get started with TypeScript and Yoctopuce modules".

We can then use our library in Vue.js objects. For example the following code builds a list of modules present on the YoctoHub with the IP address "192.168.1.15".


For readability reasons, we have included only the script of this Vue.js component. But you can find the complete code on GitHub.


We have modified the main page of the application which is automatically created by quasar when the project is created.

The code is too long to be detailed, but the main page is an expanded version of the code we just presented. The complete project is available on GitHub.

To test the project locally, you need to run the "quasar dev" command at the project source. This command compiles the project and runs it in a browser. 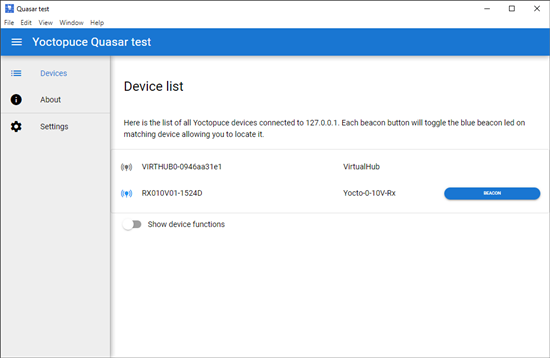 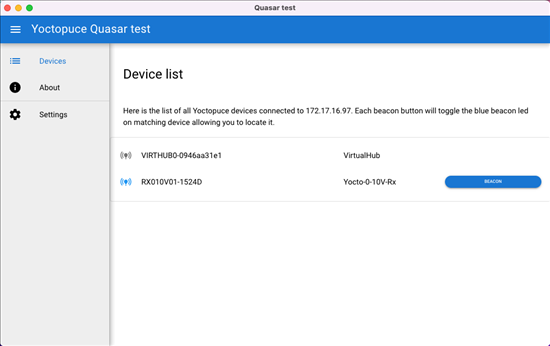 
The mobile versions are compiled using Cordova. This application is not included with Quasar, and must be installed using npm:

You also need to have Android Studio and Xcode installed.

As for the Windows or macOS versions, it is possible to launch the application in debug mode during development with the following commands:

To get the production versions, simply replace "dev" by build:


The goal of this article was to see if we could easily make the equivalent of the VirtualHub main page with this framework. And the answer is yes. Once the application was written on our development machine, we were able to generate all versions without having to modify a single line of code.

This application is basic, but uses the network and stores settings on disk. These features are not so obvious to implement in a mobile application.

This is not completely surprising, as this framework is actually a stack of other well-known technologies: npm, Vue.js, Electron, Cordova, etc. But offering a unified package as well as good documentation is very nice and saves a lot of time.

However, the downside is the amount of dependency on npm libraries that this application needs. The risk is to use, without realizing it, a package that contains a vulnerability. Or to find yourself unable to compile your application, because one of the packages has been removed. This is currently the biggest problem of all solutions that are based on npm packages.

In any case our TypeScript library is compatible with this framework. It's up to you to weigh the pros and cons of this solution.