In an industrial environment, the 4-20mA standard is a practical and robust mean to move a captor several hundreds of meters away. But when you multiply the number of sensors or the physical parameters to be measured, or when the resolution of analog transmissions is not good enough, you must find another transmission system. That's when the RS-485 standard comes in: it is the industrial cousin of the RS-232. And from today, thanks to the Yocto-RS485, you can interface RS-485 devices with the same ease of use an any Yoctopuce module.

Compared to the RS232 standard, the RS485 standard has numerous advantages in industrial environments:

Working as a bus requires an addressing mechanism for each device. This mechanism depends on the selected software protocol. For example, the MODBUS standard works with a master node that initiates requests and n slave nodes identified by an address byte (slave id ) at the beginning of each message.

The RS485 standard works in half-duplex: a single node can transmit on the bus at a time. As most protocols follow the "request-answer" principle, this has usually no impact on performances. There is however a full-duplex variant, the RS422, but it is used only for applications requiring a high transfer rate. 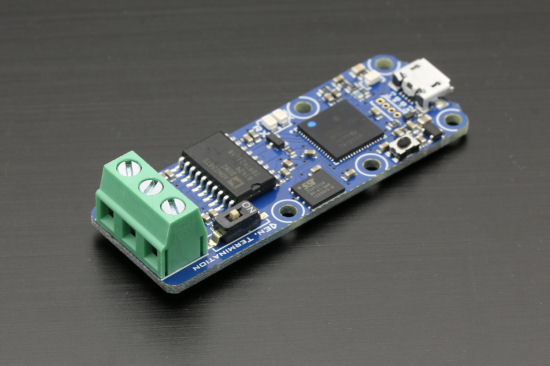 The Yocto-RS485, an interface between RS485 and USB


The Yocto-RS485 follows the same principle as the Yocto-RS232: basically, it's a simple gateway between USB and an RS485 bus. But with the usual advantages of Yoctopuce modules:

But the Yocto-RS485 is more than a USB to RS485 adapter: you can configure it to periodically autonomously query your RS485 devices and to store the measures in its flash memory, for example. As the Yocto-RS232, the Yocto-RS485 can present the data that it reads as a standard Yoctopuce sensor. And you can naturally connect it to a YoctoHub-Ethernet or a YoctoHub-Wireless to query it through the network rather than by USB, or even to post the measures on a remote server on Internet...

If you need to interface a MODBUS device, the Yocto-RS485 is made for you: the module natively supports this protocol. It can autonomously send, recognize and decode MODBUS frames. Moreover, the Yoctopuce library includes high-level functions to perform MODBUS queries.

There are numerous applications of the Yocto-RS485, in particular in the domain of industrial sensors. Here are a few examples of probes and RS485 devices which we found interesting:

You should now be able to communicated with almost any device with a serial interface, and even to transform this device into a standard Yoctopuce sensor. All you have to do is to select the appropriate model between the Yocto-RS232, the Yocto-RS485, and the Yocto-Serial, to configure it, and to connect it.