You probably heard of water rockets and might know that it's quite easy to build them yourself with soda bottles and hose nozzles. This type of "toy" can be propelled to quite breathtaking heights, which makes it a rather fun hobby. Well, Yoctopuce looked into it...

Like classical rockets, water rockets are propelled by reaction: the motor is nothing else that a bottle partly filled with water and then put under pressure. When launched, compressed air violently flushes the water in the bottle and, by reaction, the rocket moves (fast) in the direction opposite to the water. 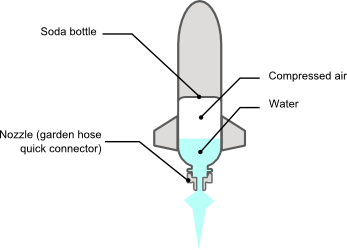 The working principle of a water rocket


Hand-made water rockets are often based on hose nozzles that automatically lock themselves. The male component is glued to the bottle neck and the female component, containing the locking system, is connected to a hose planted in the ground and itself connected to a bicycle pump. It's the launcher. 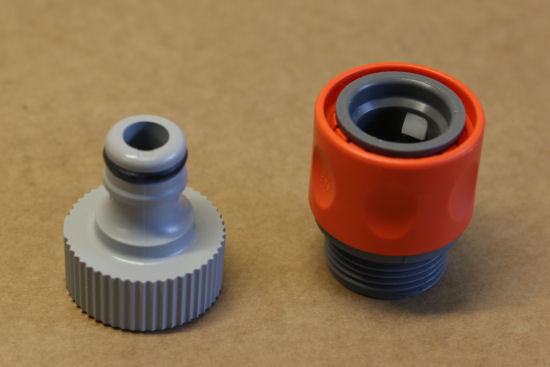 
To launch a rocket, you partially fill a bottle, you fix it upside down on the launcher, you pump like a madman, then you trigger nozzle unlocking, and the rocket shoots forward. Dead easy.

At Yoctopuce, we like to automate things. So we decided to take the concept of water rockets further by creating an autonomous rocket launcher. This launcher must take care of filling the rocket, putting it under pressure, and launching it, while we watch the show from a safe distance.

To do so, we are going to use, on top of the essential hose nozzles:


The first idea is to separate the water filling circuit from the pressurizing circuit, to prevent water flowing back into the compressor when pressurizing. Compressors, like bicycle pumps, don't appreciate being filled with water. 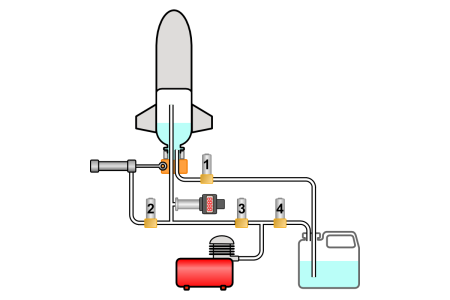 The water and air circuit of the launcher


The water/air separation in the bottle is ensured by a small tube which goes very high in the bottle. Compressed air goes in through this tube, and we know that water cannot go out from there. 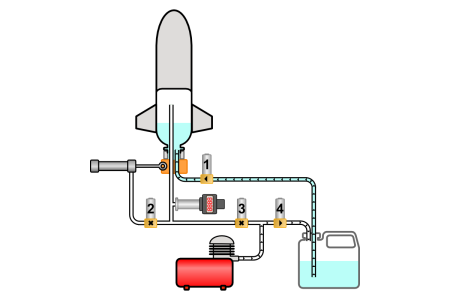 
We used a simple plastic drum as a water reservoir, but we had to reinforce it as it started to bulge alarmingly in the filling stages.

When filling is done, we isolate the water circuit by closing valves 1 and 4. Then we open valve 3 and we go on pumping until we judge that there is enough pressure in the bottle. We then stop pumping and we close valve 3. The rocket is ready for launching. 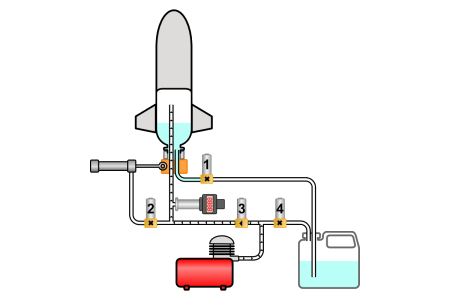 We could have used a RC model servomotor to trigger the hose nozzle, but it would have been drenched with water during each launch. So we preferred to use a small pneumatic piston connected to the nozzle. To launch the rocket, we open valve 2 which triggers the piston and frees the rocket. 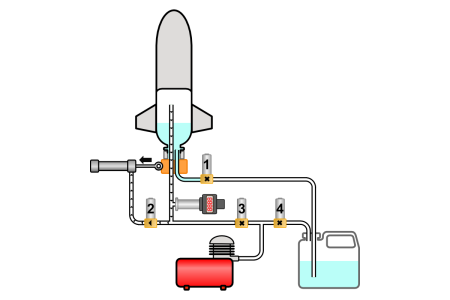 
The air moving the piston is taken from the bottle, but it's a negligible quantity so not a real issue.

We therefore designed an X shaped structure on top of which all the elements are screwed. Thus, all parts of the launcher are easily accessible. 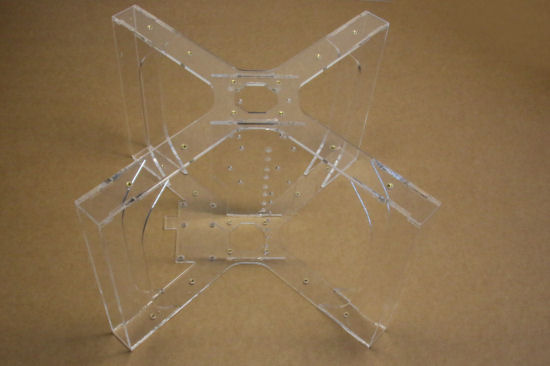 
The hydro-pneumatic component is made of 4mm polyurethane pipe for compressed air, and we used push-in fittings whenever possible. 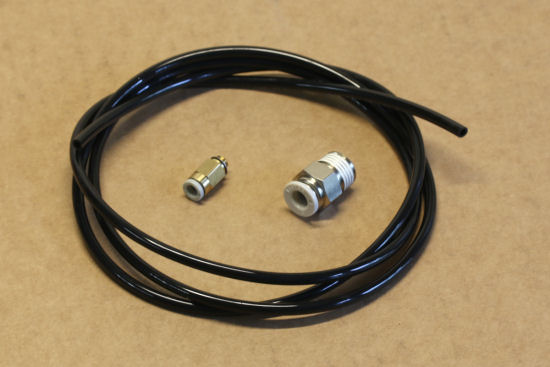 The launching tube is the most delicate component to build. You must start by finding a suitable tube. It is in fact a fitting on which we must adapt the hose nozzle as well as the push-in fittings, even if we need an army of adapters. Inside the large tube, there are several small pipes connecting the distinct outputs, everything is drowned in epoxy resin. The capillary and the push-in fittings are screwed on threaded inserts also drowned in the resin. 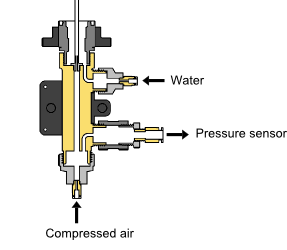 The launching tube and its internal structure 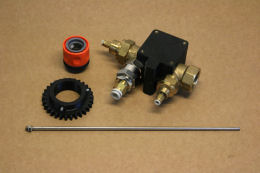 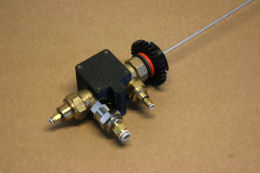 Whenever possible, pipe components were glued together with epoxy. Thus, no need for joints and no leaks. :-)

We used a 12V compressor powered from a cigarette lighter, bought for ~$20 in a local store. We stripped it of its plastic case and we screwed it on a support. 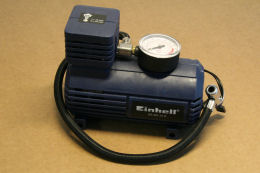 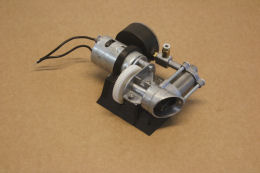 They are 24V electrovalves. Their current consumption is only of 100mA. This enabled us to drive them directly with the Yocto-MaxiCoupler. 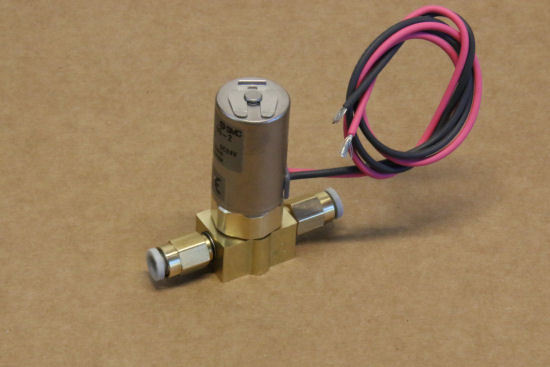 The pressure of the air circuit is measured with a 4-20mA pressure sensor connected to a Yocto-4-20mA-Rx. 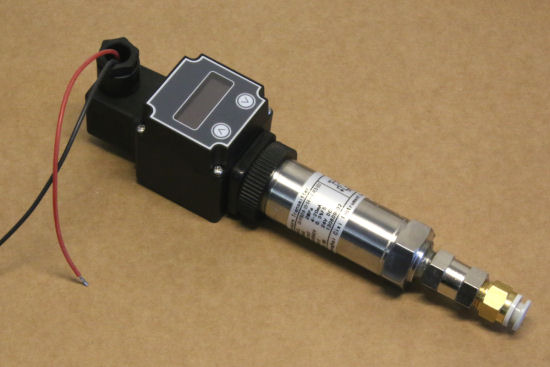 Triggering is based on a small pneumatic piston which actuates a gear rack, itself actuating a gear wheel fixed to the hose nozzle. The rack and the wheel were made with a 3D printer. 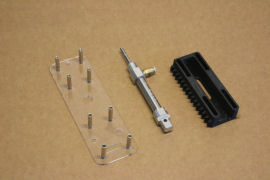 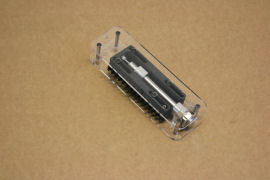 The Yocto-4-20mA-Rx and the Yocto-MaxiCoupler are driven by a YoctoHub-Wireless. The idea is to configure the YoctoHub-Wireless in ad hoc mode. Thus, the launcher generates its own Wifi network and can be used without hassle in the middle of nowhere.

Wiring of the Yoctopuce modules in the launcher


The early tests showed that we needed to move the YoctoHub-Wireless antenna away from the compressor. When working, there is enough inerferences close to the compressor motor to prevent any radio communication. So we put the antenna on a small pole on the side of the launcher. 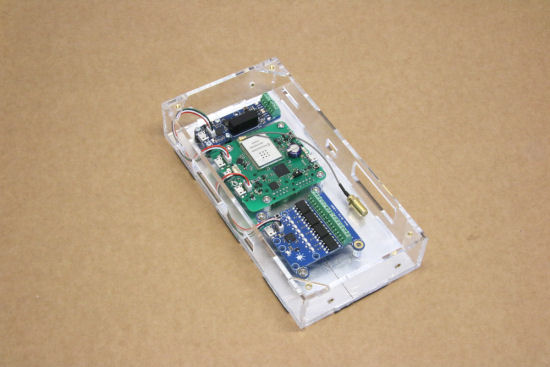 The electronic component. The YoctoHub-Wireless is a pre-series model, hence its green color.

The power source is a tricky issue. In the setup, we have:

To power everything, we decided to use one of these portable batteries which are used to start your car when its own battery is dead. This device, designed to be easily carried, provides 12V and even has a cigarette lighter socket. 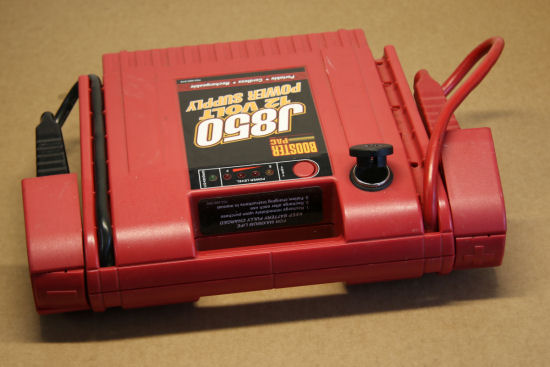 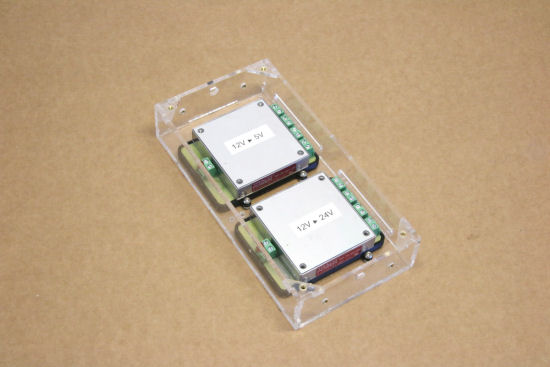 As there were empty outputs on the Yocto-MaxiCoupler, we used two of them to control cameras and to take pictures of the launches. We used this method before, it is described in a previous post.

We are not going to turn a blind eye: although compact, the launcher looks like gasworks. But it's got style anyway. Dads are always proud of their offsprings :-) 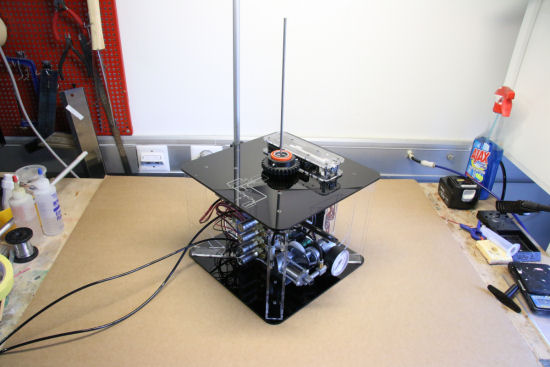 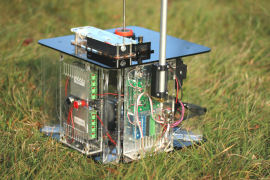 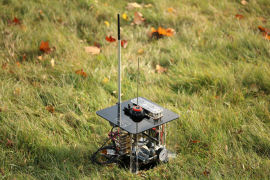 Early tests with a simple soda bottle were quite promising. 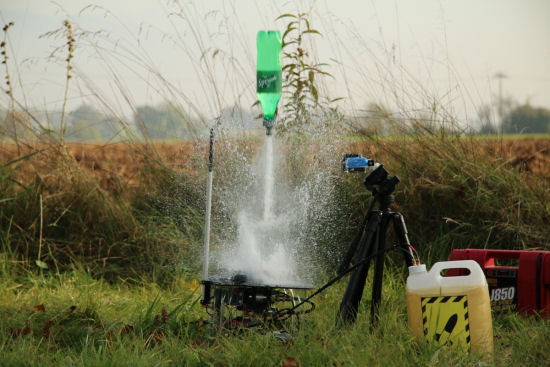 Launcher: done. Next week, we'll take care of the rocket...