With the energy crisis coming this winter in Europe, the order of the day is "watt hunting". A good opportunity to build a small tool that should allow us to save a few.

At Yoctopuce, all the production machines that consume a significant amount of energy are of course switched off when not in use. On the other hand, a good part of the IT infrastructure remains permanently switched on, even at night. One reason is to allow employees working from home to access everything whenever they want. However, it is clearly not necessary to keep everything on. The most obvious example is printers, which don't really need to be on when no one is in the office.

Of course, one could decide that the last person to leave turns off the lights and the printers, and the first person to arrive turns them back on. But if we push the concept further, we might end up with endless first-in/last-out checklists. In short, rather than making life difficult for people who arrive early or leave late, we preferred to automate the whole thing a little.

The idea is to build a Wifi-controlled power strip that can turn on each of its outputs independently while measuring the current flowing through it. It's actually a DIY device very similar to the WiFi extension cord that we built a few years ago.

For this, we use

We packed all this with a C13 plug and 4 J(T13) sockets in an electrical box with a small TRACO POWER TIW 06-105 power supply. We know that it is not the most efficient power supply but we did not want to take apart a wall charger to recover its electronics. 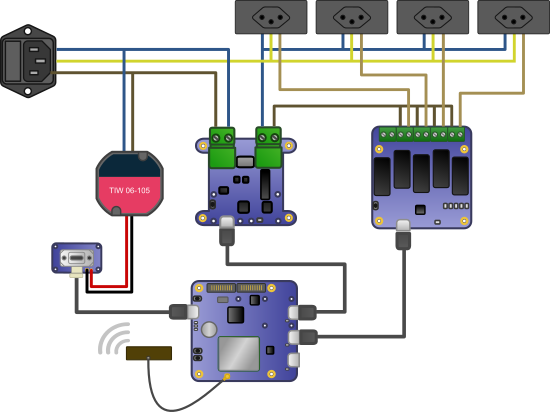 Diagram of the box

We limited the power of the box with 5A delayed fuses, integrated in the C13 plug, to prevent the Yocto-Watt from heating up too much in this non ventilated box. Note that we still have a free port on the YoctoHub-Wireless-n, we could easily add a Yocto-Temperature to monitor the temperature inside the box in case of doubt.

We also added a small push button to manually wake up the YoctoHub-Wireless-n when it is sleeping. 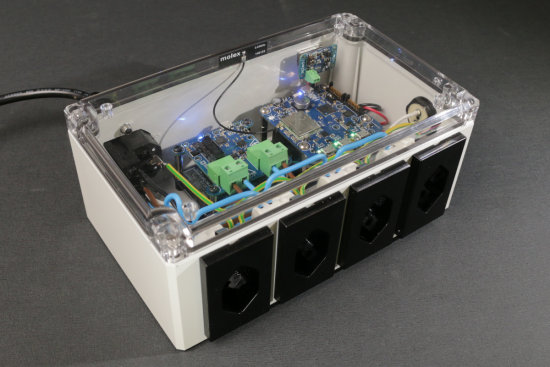 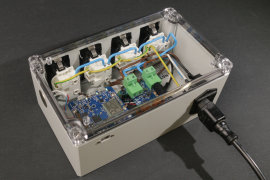 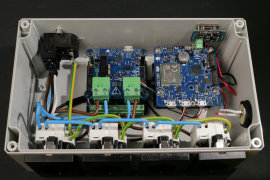 The box in question

This box will be used in several scenarios.

Thanks to the Yocto-Watt, the box can measure the current flowing through it. Not only can these measures be stored in the data logger of the Yocto-Watt, but the YoctoHub-Wireless-n can propagate this data to the cloud of your choice. After some hesitation, we decided not to implicitly measure the consumption of the box since the YoctoHub-Wireless-n is able to measure its own consumption and that of its sub-modules. But it's easy to change by modifying the wiring, we would only need to move the power supply of the TIW 06-105 from the C13 plug to the output of the Yocto-Watt.

Automatic on & off switch

The YoctoHub-Wireless-n is able to go to sleep and to wake up by itself. When it is asleep, it only consumes a few µA and the modules connected to it are switched off. So if we configure the relays to activate on power up, we can make the box turn on from Monday to Friday early in the morning and turn off after half a day, without having to use a computer to drive the system. If someone needs to use one of the devices powered by the box while the hub is asleep, s/he just has to press the push button and everything turns on again.

Thanks to the YoctoHub-Wireless-n, each relay can be remotely controlled, which allows you to turn on devices in a particular sequence, which is very useful when you have machines that must interact with one another. Note however that for this, you need to have a computer turned on that can take control of the multi-socket.

As expected, we tested our first model on the printer pool, which includes laser printers and label printers.

Consumption of the printer pool over several days

With all the printers on standby, there are eight of them in all, we notice an average consumption of 40W, and we notice that a laser print costs us almost 1000W during about twenty seconds. If the printers are turned off 12 hours a day, we save about half a kilowatt-hour per 24 hours. It's not much, but it's much more than the 1.75W that the box consumes when it's on. And it seems that little brooks make great rivers :-)