Now that Windows 8 is finally available, we had to check that our modules work without trouble on this new OS. To perform a real test, we created a small C# application allowing us to monitor the temperature of several components of the computer (disks, graphic card, etc.) with the help of thermocouples. The good new is that it works!


We wrote our test application under Visual C#, for Windows 7, and we are going to test it under Windows 8 to check that our library code is portable. The idea of this test is simple and well-known from PC tuning fans: we want to monitor with simple gauges the evolution of temperature at various key points of the machine, for which there is no built-in temperature sensor.

The temperature sensors (thermocouples) are affixed on the objects to monitor with the appropriate adhesive band. 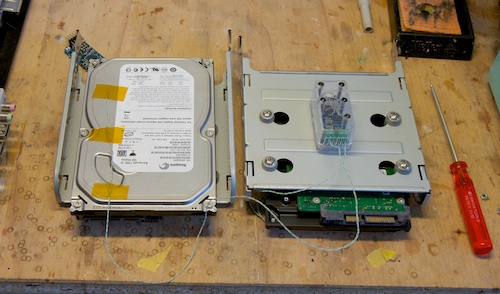 Temperature sensors are affixed on the disks

There is always room for a tiny Yoctopuce sensor, even in a crowded tower...

When we run our test application under Windows 8, as it's a desktop type application (and not a new generation Windows App), everything happens as with Windows 7: we find the usual windowed environment, and the program functions in the same way. In the present case, this application allows us to keep the control gauges in a corner of the screen while we run a few performance tests. 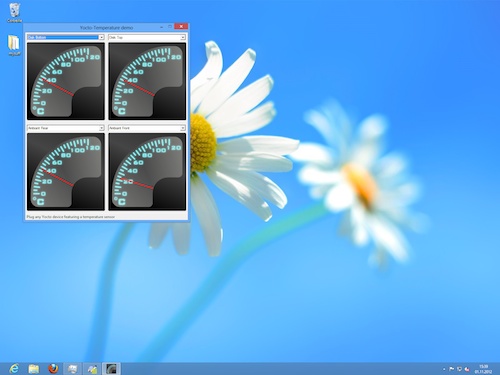 A Windows 8 desktop application, quite similar to Windows 7 application...

The same application builds seamlessly on the new Visual Studio Express 2012. The project is upgraded automatically to the new format, and can be re-used without any change.

We still have to see which modifications we need to perform to allow the library to work directly in a Windows Store App, and there it won't be that simple: Microsoft has decided to block all low level access to the devices for the Apps, to enable the OS to check access privileges. The only authorized access method would be to use a specialized driver, which would be automatically downloaded from Windows Store when the module is connected. This is not a good news: we made everything possible in our API to make sure you don't need to deal with drivers, and Microsoft decides that you will have to install a driver, even if it provides no actual benefit. You don't believe this is just for Microsoft to better control on who runs what software on what machine, do you ?

Initially, we hope to provide you with a version of the Yoctopuce library working exclusively via the VirtualHub (run as a service on the machine), and which you could integrate into a a Windows Store App. But the story will probably not stop there, because native support of USB modules under Windows RT will certainly be useful for some applications...