While shopping at one of our usual suppliers, we came across an intriguing gadget: AA batteries, with an integrated USB-C charging port and which promise a capacity of 1600mAh for a 1.5V voltage. We couldn't resist the temptation to buy a pack, just to check if an AA battery with an integrated charger really works.


We chose batteries sold in Switzerland by a German company but their real country of origin is not mentioned anywhere. After some research, we realized that it is a generic product made in Asia and sold under a multitude of brand names. 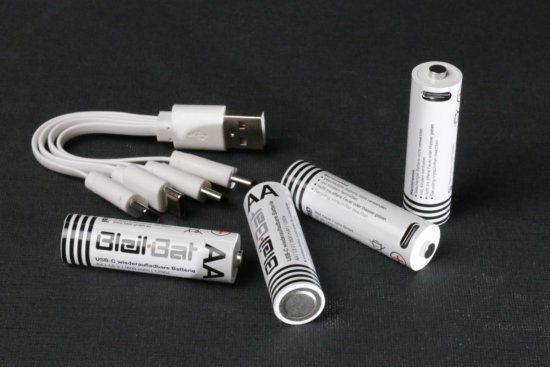 
These batteries look like ordinary AA batteries except for the USB-C receptacle on the positive pole side. They are based on lithium-ion chemistry, which means that the cell inside has a voltage of around 3.2V. Therefore, in addition to a charger, the battery also contains a regulator to lower this voltage to 1.5V.

To see how these batteries behave, we built a small test bench with two Yocto-Watt batteries, each connected to an AA battery holder and a large power resistance. The two Yocto-Watt are driven by a YoctoHub-Ethernet powered by a PoE Ethernet cable. This configuration enables the experiment to live its life quietly in its own corner. 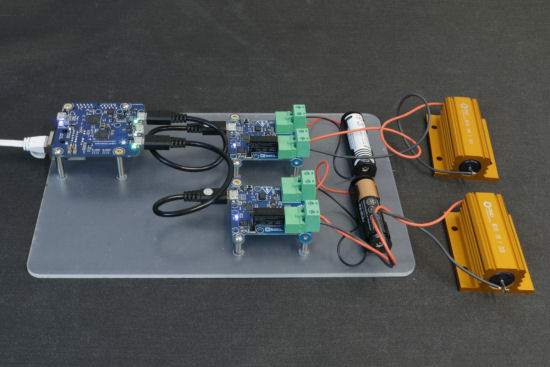 Comparison with an alkaline battery

We tested in parallel one of the USB-C batteries, which we call battery A, just out of the charger, with a Duracell PLUS MN1500 alkaline battery. We discharged them with two 10Ω resistances while we displayed the values measured by the two Yocto-Watt in Yocto-Visualization.


We can see that the battery provides a stable voltage of 1.45V while supplying about 145mA. This voltage drops abruptly after 8 hours to stabilize at ~1.1V for half an hour before the battery dies, and then turns on again very briefly 2 hours later.

This voltage drop to 1.1V is probably deliberate: it allows devices that detect the drop in voltage of their power supply to realize that the batteries are almost empty. On the other hand, the brief restart is probably not deliberate, and if you wait long enough, you realize that these parasitic restarts can occur several times. This behavior could eventually cause problems for digital devices of which the power supply is not managed by a supervisor.

The USB-C battery turns back on several times

For its part, the alkaline battery, which by nature is not regulated, saw its voltage drop steadily for 17 hours before passing the threshold of 1.1V where the USB-C battery turned off.

Comparison with a NiMH battery

We did the same experiment again with a second battery of the pack freshly charged, that we call battery B, by comparing with an Eneloop (Panasonic) BK-3MCCE of 1900mAh battery, also freshly charged. We chose a 1900mAh NiMh battery because it is the closest capacity to 1600mAh that we could find, but higher capacities are easily available.

Comparing battery B with a NiMH battery


First surprise, unlike battery A, this battery B worked for only 7H45 and provided only 1100mAh. As for the Eneloop battery, it stayed above 1.1V for 15H. During this period, it provided 1800mAh. We note that Eneloop also somewhat lied about the real capacity of its batteries, but not as much as the manufacturer of the USB-C batteries.

Considering that a discharge of 150mA is probably a bit high for the applications AA batteries are designed for, we did the experiment again by discharging battery B with a 100Ω resistance that is to say a discharge of 15 mA.


This time again, although slightly better, the measured capacity of 1170mAh is much lower than the announced 1600mAh.

We quickly tested the maximum current we can draw using an electronic load. 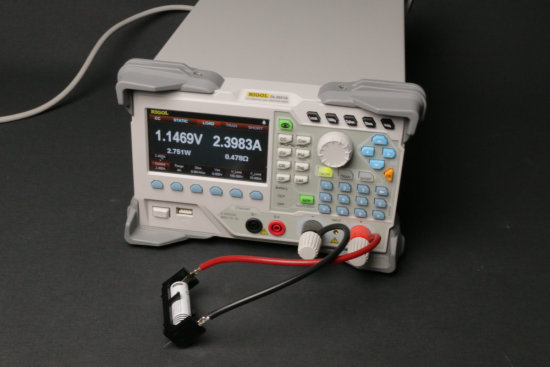 Keep in mind that these tests were done with new/freshly charged batteries and that these limits can only be maintained for a few seconds.

Being based on a lithium-ion cell, the USB-C battery should have a negligible self-discharge compared to a NiMH battery, provided that the electronics inside the battery have an equally negligible consumption when the battery is not in use. We didn't have time to test the battery for a very long time, so we re-tested the A battery 100 hours after charging it.


On such a short duration, the result is inconclusive as the battery A took 8h45 to discharge instead of 8h30. We can just deduce that the idle consumption of the battery electronics is not prohibitive.

Is there a real advantage to this kind of batteries?

We've been looking into what kind of advantage a rechargeable AA 1.5V battery with a built-in charger would have over standard rechargeable batteries.

No need for a charger

This is the most obvious advantage: you don't need a dedicated charger anymore, but does the decrease in capacity justify the gain in size when you can easily find tiny USB chargers barely bigger than the 2 or 4 AA NiMH 2500mAh battery packs they can charge?

These USB-C batteries provide a constant voltage of 1.45V which is very close to the voltage of a new non-rechargeable battery. So you can use them in devices that do not work with NiMH batteries which have an average voltage of 1.2V.

Recharge the batteries without taking them out

You could think that this configuration would enable you to recharge these batteries without having to take them out of the device that uses them. It turns out that this is not a good idea at all. For one thing, we've noticed that simply plugging in the supplied charging cable ties all the negative poles of the batteries together. If your device contains several of these batteries connected in series, you will create short circuits. On the other hand, we discovered that a 5V voltage appears at the terminals of the battery when it is being charged. So even if your device contains only one battery, it may not appreciate the operation. 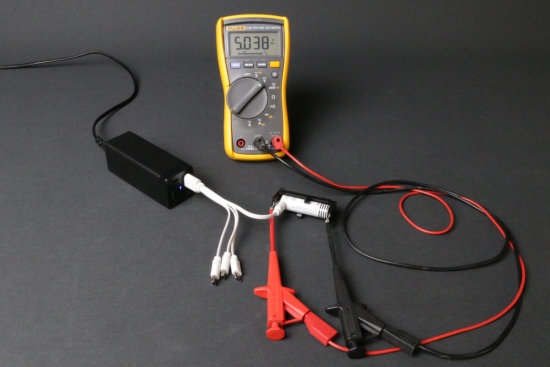 Managing to fit a charger and a regulator into a AA size battery with a voltage of 1.5V, while keeping a reasonably usable capacity is a remarkable achievement. However, even if these batteries can be directly recharged from any USB source like USB power supply, computer, power-bank, and so on, we are not really convinced of the actual utility of this architecture with integrated charger, unless