We discovered somewhat by chance the ADH-Tech GT-521F52 fingerprint reader. As it is really affordable, less than fifty US dollars, we decided to buy one two, to see what we could do with it.

The GT-521F52 is a PCB of about 36x21mm with a large parallelepiped smack in the middle: it's the fingerprint reader itself. There is a JST connector on each side of the PCB, the left one is used for the serial connection, the right one is used to reprogram the module and offers a logical output going to 1 when you put a finger on the sensor. Useful to wake up sleeping electronics. 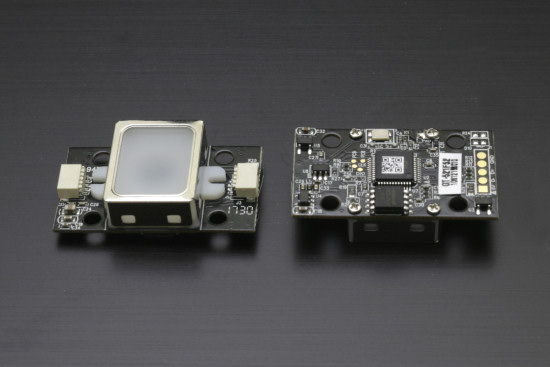 The GT-521F52 fingerprint reader, top side / bottom side

This reader is apparently able to store up to 3000 fingerprints and it can tell you when you put your finder on it if this finger matches to one of the stored fingerprints. Of course, you do the fingerprint learning via the same sensor.

There are two ways to connect this sensor, you can


Beware, the reader works in 3.3V. To avoid damaging it foolishly, we recommend that you configure the working voltages on the Yocto-Serial before you connect the sensor. You must select:

And while you are at it, you can define the serial port parameters: 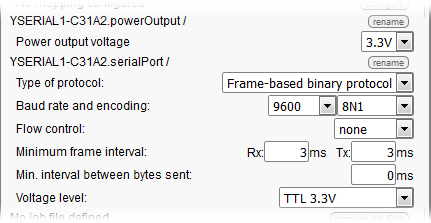 To connect the fingerprint reader to the Yocto-Serial, we used the recommended cable that we cut in half to remove one of the connectors. However, the wire colors do not correspond at all to their functions. You must select: 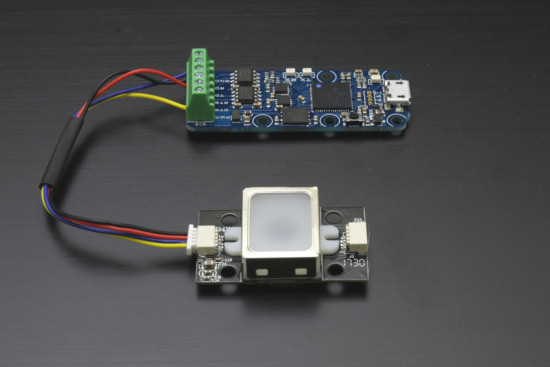 The same, but in real life

You drive the GT-521F52 by sending and receiving 12 byte binary frames. The documentation is very complete, but not necessarily very explicit. You must read the small characters carefully to know in which exact order you must send the commands. To render the system more user-friendly, we wrote a small Python library which enables you to use the basic functions of the reader without racking your brain. It allows you to

Managing fingerprint reading and recognition is performed in the background, so the application can do whatever it wants while waiting for someone to put a finger on the reader. Here is a very simple use example.

if not scanner.open(): print(scanner.lastErrorMsg)
YAPI.Sleep(100)
scanner.ledControl(True) # don't forget to turn the  internal LED on!
scanner.set_eventCallback(eventCallback) # callback to call after any fingerprint scan
scanner.runInBackground() # fingerprint recognition will automatically  run in background

Here is a short and quick demo made with a Yocto-Buzzer.

You can download the library as well as the example code here.

We didn't get any bad surprise while writing the code managing the GT-521F52, but we still encountered two minor issues:

This small GT-521F52 sensor works remarkably well for a basis scenario, that is recognizing a fingerprint. It even recognizes a finger colored with a big black permanent marker (someone knows where the acetone is?). However, as it is a purely optical sensor, we doubt that it could make the difference between a real finger and a latex imitation, and we don't even talk about making the difference between a live finger and a dead/cutoff finger.

Now, we still have to find the reader a somewhat fun application. We'll talk about it again at a later date :-)