Once again, we have the pleasure to announce a product improvement. We are replacing the Yocto-RS485, our RS485 isolated interface, with the Yocto-RS485-V2 which is fully compatible but benefits from improvements in terms of electromagnetic compatibility.


The RS485 standard is mainly used in industry, as it has several advantages. First, it offers great robustness to electromagnetic perturbations and enables distances 100 times longer than the RS232 standard, for example. Second, an RS485 connection can work on a bus and thus enables several sensors to be chained, while the RS232 is designed only for point-to-point connections.

But when you want to use long wires in an industrial environment, you must be ready to resist severe electromagnetic perturbations which are likely to be induced on the wires by other machines. You must expect to be connected with devices powered on different phases, with surges when power-hungry machines are turned on and off on the same circuit, and many other electromagnetic horrors of this type. The first Yocto-RS485 was already quite well protected against this type of issues, but the new Yocto-RS485-V2 increases the module immunity even more.

These improvements required a very minor modification in length, as the Yocto-RS485-V2 measures 60mm long against 56mm for its predecessor: 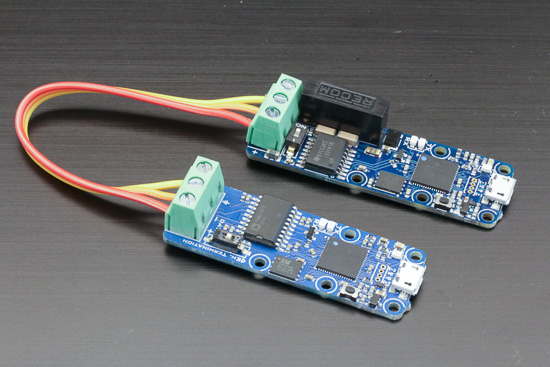 The Yocto-RS485 and its successor


Both fit in the same enclosure, the YoctoBox-Long-Thick-Black, so the few additional millimeters shouldn't make a difference in most cases.

The improved components unfortunately lead to a slightly more expensive product than the previous version version. As for technical specifications, here is a comparative table of the characteristics of the two devices:


We hope that this new product will fully meet your requirements. In case you hit any snag, don't hesitate to contact our technical support !