To open the door to new applications, we extend our range of analog voltage measuring tools. The newcomer, the Yocto-MaxiMicroVolt-Rx, is the most accurate of all, and it can measure minute voltages, in the order of the micro-volt. Let's see what this means...

First, let's recall what we mean by the accuracy of a sensor, which we should not confuse with its sensitivity or its resolution.

The accuracy of a sensor is its capacity to inform on the objective magnitude of the signal to be measured, independently of all the technical or environmental issues raised by the measure. If a sensor has a 1 µV accuracy, it means that when it measures 10 µV the signal is truly between 9 µV and 11 µV in the worst case scenario.

The sensitivity is a more permissive notion: it doesn't guaranty that the measured value exactly corresponds to the real world in absolute value. A sensitivity of 1 µV says that if the measured signal shifts by 1 µV only, the shift is visible on the measure and translates into a corresponding shift in value. This means that without necessarily being exact, the shift is not hidden by measuring noise.

The resolution guaranties almost nothing, apart from the number of distinct values that the tool can produce. A device with a 20 bit resolution can indicate a value with 20 digits in basis 2, that is the equivalent of 6 digits in basis 10, but nothing indicates the distance between the shown value and the actual signal value, nor how many digits are significant, and how many are drowned by measuring noise.


The Yocto-MaxiMicroVolt-Rx is the first product that we offer that can announce an accuracy reaching 1 µV on low signals, and 500ppm, that is half a per thousand, for signals up to +/- 2 V. Such an accuracy actually implies an even much better sensitivity and resolution, enabling us to measure a low signal even when it seems to be hidden by noise. 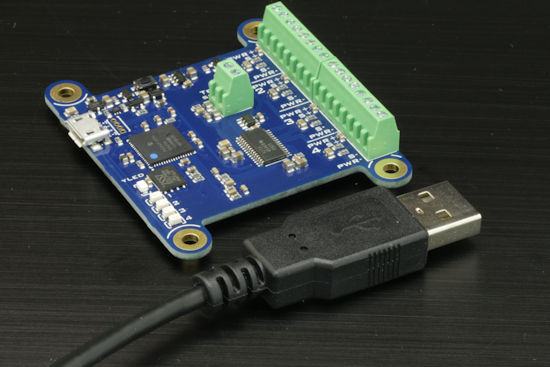 
The analog/digital converter used is the ADS1263 chip from Texas Instruments, which performs sampling with a 32 bit resolution at very high speed, then applies a selective numeric filter to subtract the surrounding noise at 50Hz or 60Hz caused by the electrical distribution networks present in all buildings. To obtain the announced absolute accuracy, we added to it an external voltage reference which is ultra-stable over the entire temperature range.

In the opposite to other analog voltage sensors, the voltage measure performed by the Yocto-MaxiMicroVolt-Rx is not truly isolated from the USB bus: measured signals must be located in a range of 2.5 V above the ground of the USB bus. However, it's a differential measure: the voltage to be measured is given by two independent wires, each of them can float freely on this range, and the Yocto-MaxiMicroVolt-Rx measures the difference between the two potentials, positive or negative. You can even measure four pairs of independent (differential) inputs, the measure is performed alternately on each of the channels.


The Yocto-MaxiMicroVolt-Rx was designed in particular to accurately measure low voltages produced by electrochemical sensors, such as gas sensors. Several additional features have been included in the sensor for this purpose, which may be useful to you:

This latter feature enables you to benefit from the tools available for Yoctopuce sensors (data logger, Yocto-Visualization, and so on) directly on the computed quantities such as gas concentration, and not only for the voltage measured on the electrodes, which makes this module an interface for electrochemical sensors in its own right. We will have the opportunity to present you with a detailed example in a future post.

In closing, here is a summary of the characteristics of our range of analog voltage sensors: