Our blog articles are generally used to give ideas on how to solve issues with Yoctopuce modules.Today, we offer you not an idea but a complete realization, which can be used by any user without computing knowledge...

The user has a key which must be returned to him in a key-box. He wants to receive an email when the key is back in the box. There is an Internet connection close to the box, but nothing else. The user has no specific computer skills. We must therefore offer a solution which doesn't require him to perform anything more complex than to view a web page.

How can we detect a key in a box? We had the idea to attach an RFID chip to the key and to place an RFID sensor in the box. Yoctopuce doesn't have an RFID reader in its module range. But Parallax offers one with a serial output for less than 50 dollars. We only need to connect a Yocto-Serial to it and to configure the module for it to behave like a sensor of which the value is the ID of the detected RFID chip.

To avoid having a computer permanently on close to the key-box, we propose to connect the Yocto-Serial to a YoctoHub-Ethernet. Thus, we can configure it to be driven in callback mode from a PHP script running on a remote server. Other advantage: the YoctoHub-Ethernet can be powered by PoE, we can therefore bring a single wire to the box. 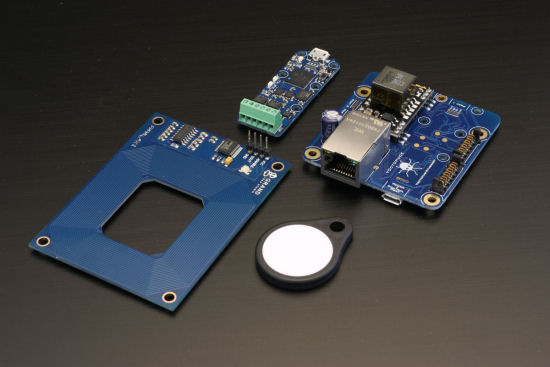 The distinct electronic components needed to build the box


This solution present numerous advantages: the customer only needs to connect the modules to one another, and the modules can be pre-configured. The programming part is limited to a PHP script which needs to be copied on a server, a task that can be easily performed remotely by someone else.

The Parallax RFID reader is a simple reader with a serial interface. It needs a 5V power supply which means that we can even power it from the Yocto-Serial. Its behavior is very basic: when it detects an RFID chip nearby, it sends once per second the chip ID on the serial line. When there is no chip, it doesn't do anything. The Yocto-Serial is simply connected to the YoctoHub-Ethernet which is connected to the network.

Connections between the modules


The RFID reader has rather limited capacities: it detects an RFID chip only if it is quite close, 2-3 centimeters at most. We must therefore make sure that when we put the key in the box it automatically finds itself close to the sensor. We used a simple mailbox and we built a small structure inside, a sort of funnel, at the bottom of which we put the sensor. 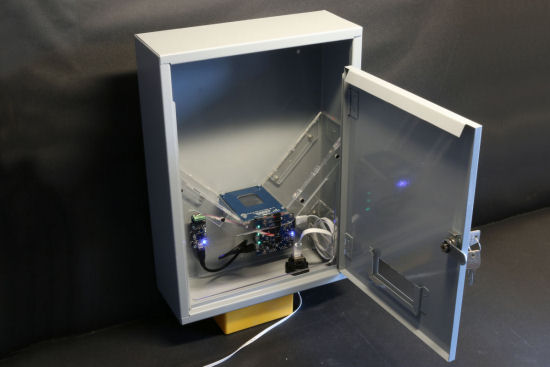 We put everything in a simple letter-box

For the software part, we decided to put everything in a single PHP file which must:

Rather than store the system state in a database, we decided to do it in a simple small .ini file. It's neither very elegant nor very efficient, but this avoids having to configure a database. The software installation is therefore limited to the copy of some files.

The complete PHP script is not very interesting. It is mostly code implementing a basic user interface. You can download it here. There are, however, some particularities:

For everything to work, the Yocto-Serial, the YoctoHub-Ethernet, and the script must be configured appropriately. You can configure the Yoctopuce modules with the VirtualHub, the PHP script offers its own configuration interface.


When everything is configured, put the key and its RFID chip near the reader to receive a few seconds later an email signaling its presence. Here is a short video illustrating how the system works.

With two Yoctopuce modules, a cheap RFID reader, and a relatively short PHP script, we managed to build a system that sends an email each time it detects a key or any other object equipped with an RFID chip. Significant advantage: The system doesn't need a local computer to work, a simple connection to the Internet is enough... In short, a solution mirroring the Yoctopuce technology: simple and effective.