By mvuilleu, in Reviews and Electronics, september 18,2015.

Those of you who have read our general terms and conditions know that Yoctopuce modules are not certified for any governmental compatibility standard (CE, FCC, and so on). As they are specialized components designed to be used in a larger system, and not end products for the general public, this is not strictly necessary to sell them in Switzerland. Nevertheless, we wanted to perform some measures to know where we stand with regard to these standards. So we visited a specialized laboratory with some of our modules ...

Compatibility standards are a real jungle, in which you can only find your way with the help of a domain expert. For our products, the most appropriate applicable international standard is called IEC 61326-1. It covers European (EN) and American (FCC) conformity requirements for scientific, test, and measurement hardware. The test suites are defined in other standards, in particular the CISPR 11 for emissions from our products and IEC 61000-4 for immunity to external perturbations.

The test suites to be performed are the following:


As our modules are powered in direct current with wires under 3 meters, we don't need to test other types of immunity on the power supply.


The emission test is often the most problematic. Surprises occur there more easily because it's often difficult to anticipate all the interactions between components during the design phase. The test must be performed in a large shielded measuring room, protected against all external perturbations, and with walls specially designed to absorb electromagnetic waves and to avoid reflections. Sophisticated instruments enable the measure of the spectrum of radiated emissions while it is working, as seen from all angles, with the help of a motorized antenna testing all the possible heights between 1m and 4m: 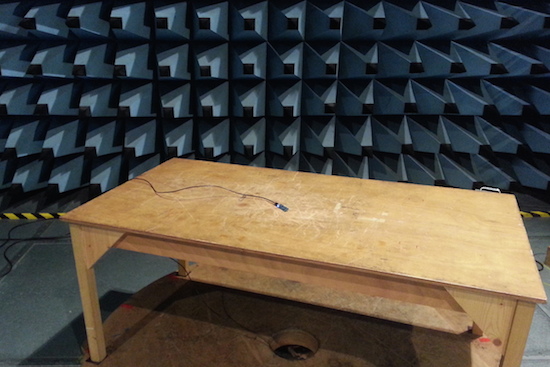 
Here is the results of the tests on a Yocto-Meteo, in full working mode, including measure logging on the flash memory at 10Hz. The curb indicates the observed maximum in all positions for the duration of the test, with regards to the stricter IEC 61326-1 standard (class B). Horizontal and vertical polarity are measured separately. 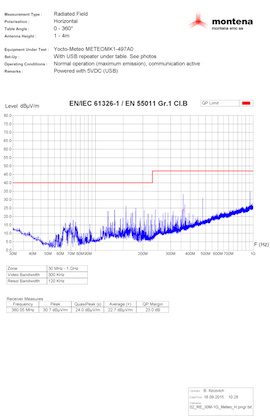 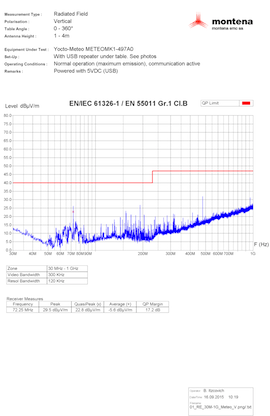 
The Yocto-Meteo passes this test with flying colors, with a comfortable margin of 17 dBuV/m compared to the requirements. We can reasonably assume that the other sensors based on a nearly identical board (Yocto-Temperature, variants of the Yocto-Light-V3, and so on) produce very similar emissions. Let's see how it goes for the Yocto-PowerRelay, measured when it commutes 10 times per second: 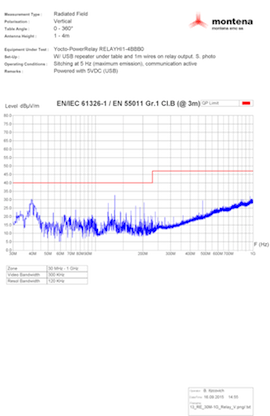 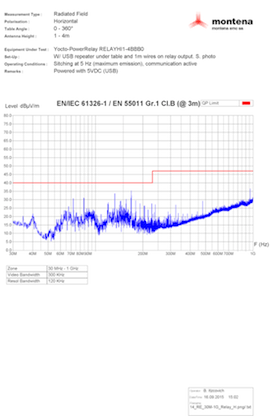 
Still no issue for this kind of module.

Let's see now what happens for modules containing an electrical isolator, such as the Yocto-PT100: 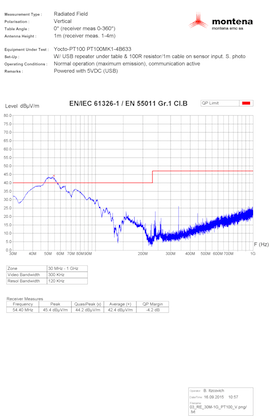 Oops, it exceeds class B requirements!


We notice that the DC/DC converter adds a significant perturbation. The module stays within the standard for an industrial environment but is out of bounds for the stricter standard. Adding a small LC filter enables us to overcome this: 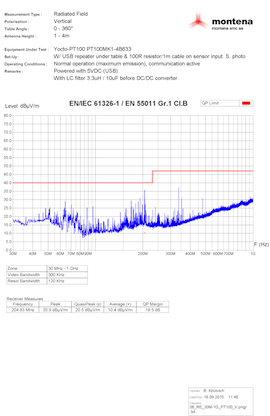 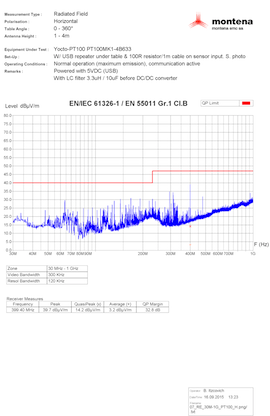 Yocto-PT100 radiated emission measures after adding an LC filter: back within the standard!


Still in the pyramid room, we test the module resistance to a strong variable electromagnetic field (10 V/m) generated intentionally. The generator tests a large frequency range, and the tests are repeated from several orientations. During the whole test, we check that the module not only continues to work but also that the accuracy of measures is not perturbed in any way and stay within the announced specifications. 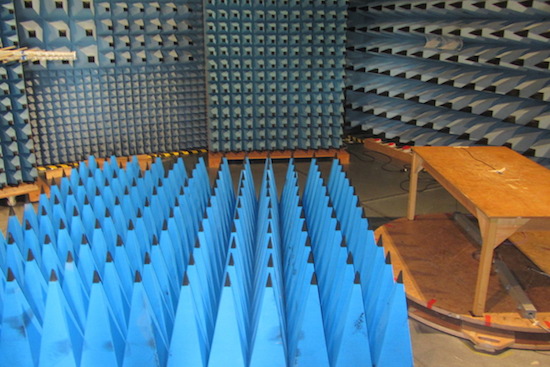 
Our digital sensors pass the test without any concern. So, no issue expected for command modules such as the Yocto-PowerRelay. For modules measuring analog electric proprieties, such as the Yocto-Volt or the Yocto-PT100 for example, we need to be cautious because the electric wires themselves, which are used to connect the measuring point to the module, act as an antenna and pick up a strong perturbation, given the strength of the applied magnetic field. To guarantee an unperturbed measure, we must for example use twisted pair cable in order to cancel most induced currents. We will also study the possibility of adding an input filter for these modules.


Immunity tests amount to torturing the modules to check that they are not damaged by exceptional circumstances which could happen accidentally. The module is permitted in this case to stop working for a short while, but it must, according to the strictest standard, start working again normally without outside intervention.

Surges are produced by a gun generating +-4kV and +-8kV impulses, in several distinct positions. The surges are repeated about 10 times in each position. The test focuses on surges sent on the enclosure, on a metallic plate in the immediate vicinity of the PCB, and on all the terminals and contacts that the user could touch.


This first day of testing was particularly instructive. The trend that emerges is that the simplest modules would probably pass all the tests with flying colors. However, isolated modules need a few simple fixes to be certain they are within class A and B requirements. We naturally plan to modify the products which would likely not pass these tests, but this will be done progressively, in the order that will be most important to our customers.


Thank you for this - nice to see.

When you have products updated it would also be nice to have the test reports visible on your web site, or available for download for each product. This makes searching for a product EMC compliance nice and easy.

@quickly: yes, we will link compliance tests to each products as we move forward with formal tests.

Regarding EN 60950, most of it should be quite easily handled by the fact that our devices are SELV (Safety Extra Low Voltage) designed to be connected to a SELV power supply (typically a USB phone charger or a USB port), which is providing the reinforced isolation required for user security.

There is one exception in our devices where we have a direct power source which requires additional attention, which is the PoE supply for YoctoHub-Ethernet. But the isolator that we use is compliant to IEEE802.3af, which includes the requirement for EN 60950 and in particular the 1500V DC pulse test. So this should be no problem neither.

For products where voltages above 60VDC or 25VAC (RMS) might be used on the terminals (such as relays), we will document clearance and isolator ratings but of course in this case a EN 60950 certification would only be effective with regard to the whole setup, including the source of higher voltage and the enclosure to protect the system, beyond just our device.