The Yocto-Buzzer is a very practical module when you want to do some signalling, such as making a confirmation beep. However, as many customers relayed it to us, its limited power prevents you from using it as an sound alarm: it is difficult to hear it in a noisy room. Never mind that, this week we present the brand new Yocto-MaxiBuzzer.

The Yocto-MaxiBuzzer is a doped up version of the Yocto-Buzzer: it is a double-width module and uses a MALLORY PT-4532-PLQ diaphragm speaker instead of a simple piezo buzzer. A true audio amplifier drives the speaker, which allowed us to optimize the output power, with a linear volume control as a bonus. The result is rather spectacular: one can output more than 100dB(A). If this thing is switched on at full power right besides you, you will instinctively want to knock it out to make it stop. 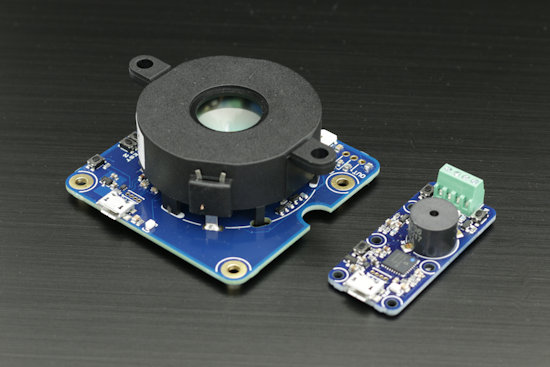 However, don't make us say what we haven't: Although it is based on audio components, the Yocto-MaxiBuzzer remains a buzzer designed for very loud beeps. It is in no way a sound card able to play MP3.

Yocto-MaxiBuzzer has two analog "anButton" inputs, the same as those located on the Yocto-Knob. They enable you to interface switches, push buttons, and other potentiometers.

The Yocto-Buzzer has two leds, a red one and a green one, that you can drive independently. On the Yocto-MaxiBuzzer, we improved the concept by using one RGB led and by adding an output allowing you to drive up to 150 RGB smart-leds, as you would with the Yocto-Color-V2, including autonomous animations. You'll be enjoying the visual part. Its the only feature which is not 100% compatible with the Yocto-Buzzer. If you have code using the leds of the Yocto-Buzzer, you must modify it if you want to replace your Yocto-Buzzer with a Yocto-MaxiBuzzer. But the effort is truly minimal and the result is really worth it.

The recommended enclosure is the YoctoBox-MaxiBuz. It's a classic double-width Yoctopuce enclosure on which we cut an opening. 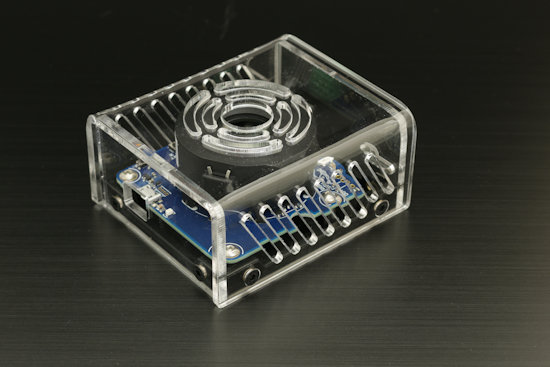 
Note that the speaker itself has two fixation holes that you can use to mount the module on a wall, or to mount accessories.

If you are interested in the source code of this demo, you can download it from here.