Yoctopuce sensors are not native sensors

Customers potentially interested by Yoctopuce sensors often wonder if these sensors are recognized as such by the operating system of their computer. Among typical questions, we have:

In all of these cases, the answer is no because the operating system of the host machine doesn't recognize the Yoctopuce sensors as native sensors. In fact, all Yoctopuce modules use a protocol called "HID vendor specific" to communicate with their USB host, so that when you connect a Yoctopuce sensor to a computer, the latter doesn't realize that it is a sensor.

We chose this protocol because it enables us to spare the users the installation of a driver to use their Yoctopuce modules. In fact, all operating systems which can manage a keyboard and a USB mouse already have a HID driver available. This enables them to talk with "HID vendor specific" devices without additional driver.

Moreover, this way of doing things is flexible enough to allow us to freely implement all the features that we deem interesting, which would probably not have been the case for a standard driver of which the architecture is often imposed.

The other side of the coin is that Yoctopuce modules work only with applications which were specifically programmed to use them. Since Yoctopuce products are not intended for the general public but for customers who want to build their own solutions to specific problems, this has never seemed to us to be a big issue. 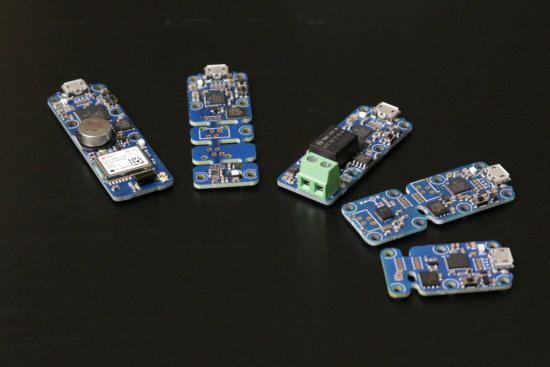 A few Yoctopuce sensors, understanding theirs inner-working is important.


get_currentValue() is not synchronous

Therefore, if you query a sensor by calling get_currentValue() in a loop, increasing the speed of your loop will not necessarily increase the frequency of your samples. Moreover, because of communication delays, querying a sensor by polling is far from efficient, you had better use a callback mechanism.

We chose this way of doing things for two reasons.


With a few exceptions, the internal sampling frequency of a Yoctopuce sensor is fixed and cannot be modified by the user. It was chosen as a compromise between acquisition speed, measurement noise, and the modest transfer capacity of USB 1.1.

It is therefore useful to understand that not only there is no point in trying to get data from a Yoctopuce sensor at a higher speed than its internal sampling rate, but it is also counterproductive. You can find this frequency in the specifications of each product. Even if you are not interested in a high frequency, the periodic callback technique can be interesting because below 1Hz, you will automatically get averaged values as well as the two extreme values for each period.

The maximum theoretical transfer rate available to Yoctopuce modules is of one 64-byte packet every millisecond. This means that callbacks at more than 1000Hz are physically impossible. In real life, there is no Yoctopuce sensor capable of offering a refresh rate higher than 100Hz.

It is useful to know that, from a programming standpoint, all the classes of the Yoctopuce API which enable you to work with Yoctopuce sensors inherit from the same YSensor class. Thus, if your application uses different sensors and you need only to use the basic functions of your sensors, you could greatly simplify your code by basing it on this YSensor class rather than on the classes specific for each type of sensors. However, there is no equivalent for actuators.

By way of conclusion

We hope that these few points will help you make the most out of your Yoctopuce sensors. If you have other questions, don't hesitate to contact Yoctopuce support.